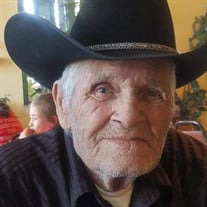 Tony Joe Lovato passed away peacefully at his home in Saguache on Wednesday, January 5, 2022. He was born in Saguache on June 15, 1924, to Melquides Lovato and Ruby DeHerrera Lovato. Tony received a 6th grade education but had to leave school to help his father when his mother passed away. He was one of eight children: Horacio, Mary, Feliciano, Pacifica, Ermalinda, Jesús, and Crucita. On November 25, 1946, he married Andrea Gloria Mondragon. They lived their entire lives in the Saguache area. Andrea preceded him in death on November 16, 2008. They raised five children: Catherine (Dave) Martinez of Avon, Colorado; Henry (Deanna) Lovato of Yuma, Arizona; Tim (Lori) Lovato of Saguache; Chris Lovato (Susan) of Saguache; and Kenny (Mona) Lovato of Saguache. Grandchildren include David, James, and Lionel (deceased) Martinez; Hal Lovato; Celeste (Jerry) Coraggio; Nate (Heather) Lovato, Elise Lovato, Naomi Lovato (Ernie Hawkes); Dakota Lovato; Brandon Lovato; and Brian Lovato. Great-grandchildren include Lionel Martinez, Jr.; Leopold Hawkes; and Haley, Timmy, Jaidon, Caitlyn, Madison, Carter, Jesikah, Emellia, and Elizabeth Lovato. He is also survived by one sister, Crucita Torres, and many nieces and nephews. Tony was a hard worker who achieved a lot in his lifetime. As a young man, he worked on ranches and loved to break horses. He also worked for Saguache County Road and Bridge as a dozer operator and built many mountain roads. After retiring at the age of 75, he helped his son Tim on the ranch until he was 87. Hobbies in later life included driving around town in his pickup; having coffee with friends at the local restaurants; watching westerns; eating black licorice, Little Debbies, and Circus Peanuts; and telling stories. He always had time for family and was a great inspiration for them. He will be missed by many whether they knew him as Tony Joe, Tony, Dad, Grampo, Poppin, P Joe, Tio, or Blue Eyes. Funeral services will be held Wednesday at St. Francis Jerome in Center. The Rosary will be said at 9:15 a.m. Mass will be held at 10:00 a.m. with burial following at Hillside Cemetery in Saguache. To leave online condolences please visit romerofuneralhomes.com. The care of arrangements has been entrusted to Romero Funeral Home of Alamosa.

Tony Joe Lovato passed away peacefully at his home in Saguache on Wednesday, January 5, 2022. He was born in Saguache on June 15, 1924, to Melquides Lovato and Ruby DeHerrera Lovato. Tony received a 6th grade education but had to leave school... View Obituary & Service Information

The family of Tony Joe Lovato created this Life Tributes page to make it easy to share your memories.

Tony Joe Lovato passed away peacefully at his home in Saguache...

Send flowers to the Lovato family.