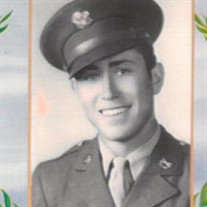 Tom R. Medina, 98, passed away on February 12, 2022 after his 25 day battle with a broken heart. After the passing of his beloved wife of 72 years Viola Medina, Tom's health steadily declined. Now Tom and Viola are back together in heaven! Tom was the third oldest child of 15 children, born to Trinidad Medina and Sylvia Burns Medina. He was born on September 24, 1923 in Center, Colorado and raised on El Rito, Colorado. Tom helped out on the family farm at a very early age. When he was 16 years old, his father moved the family to Alamosa on the 12 mile road. At the age of 19 Tom was drafted into the United States Army. Months later, he was sent to Patrick Henry, VA; where they set out on a 21 day journey by sea. He passed through the straits of Gibraltar, until they landed in Bizerte, Tunisia, North Africa. After two weeks in Bizerte, they would set sail for the invasion of Anzio Beach, Italy, near Naples. Tom spent two years fighting against the German occupation of Europe. He never talked much about the war, after all there shouldn't be much glory in death and destruction. What he did speak about was the friendships he made along the way. Doyle Nutt, from Le Ponto, AK; Charles Hines from PA; they always had each other's back and that's why they returned home safely. After the war, Tom returned home to help his father on the family farm. Years later, Tom would become the manager of a cattle ranch in East Alamosa, working for Sky Valley Farms. He knew exactly how much Alfalfa, grain and pellets to feed his cows and bulls. They were both beautiful and healthy after 8 years at Sky Valley, Tom decided it was time to purchase his own farm. He once again farmed on the Henry Road in South Alamosa, raising alfalfa, grain and oats. Tom farmed his place for 25 years until he retired at the age of 75. Even then his working days were far from over. After moving into town, every summer he would plant and cultivate his garden. He also took pride in planting the marigold flowers for his beautiful wife which Viola so dearly loved. Tom's passion in life was his work ethic. He loved to work. Tom is survived by his children Trinidad (Zibby) Medina of Alamosa, CO; Diana (John) Roybal of Lakewood, CO; Thomas Medina of Alamosa, CO; grandchildren Steven (Annette) Martinez of Westminster, CO; Krysty (Paul) Wolf of Littleton, CO; great-grandchildren Isaac Martinez, Isabella Wolf, Elias Wolf, Josiah Wolf, brother Joe (Margie)Medina of Alamosa, CO; sisters Linda (Frank) Wooding of Denver, CO; Clorinda (Evan) Sanchez of Denver, CO; Becky (Herman) Arellano of Denver, CO; Darlene (Eli) Trujillo, June (LuLu) Sanchez of Lakewood, CO; Mary Jane (Bruce) Williamson of Alamosa, CO; Annabelle (Dave) Maes of Las Vegas, NV. He is also survived by many other extended family members. Tom was preceded in death by his parents, his loving wife of 72 years Viola Medina, brothers Fruitoso, George, Jimmy, sisters Ruby, Dorothy, Belda. A Funeral Service will be held at the Alamosa Cemetery on Friday, February 25, 2022 at 1:00 PM with full military honors. The Medina family would like to thank all the family and friends of Tom for their love and support. May God bless you all. The care of arrangements have been trusted to Romero Funeral Home of Alamosa.

Tom R. Medina, 98, passed away on February 12, 2022 after his 25 day battle with a broken heart. After the passing of his beloved wife of 72 years Viola Medina, Tom's health steadily declined. Now Tom and Viola are back together in heaven!... View Obituary & Service Information

The family of Tom R. Medina created this Life Tributes page to make it easy to share your memories.