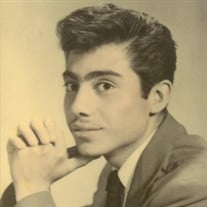 Alamosa resident Steven Espinoza, 83, went to is eternal rest on August 15, 2020 at the Rio Grande Inn in the company of angels. Steven made his grand entrance into the world on August 16, 1936 in Alamosa, Colorado the beloved son of Jose Maximino Espinoza and Soylita Mary Garcia Espinoza. Steven served and was a veteran of the United States Navy. After completing his duties in the service, he went on to work for the United States Postal Service for many years until he retired. He was a life member and commander of the V.F.W. of Alamosa, owned and operated Steve's Lounge in Monte Vista from 1962-1973. He was an avid reader and Denver Broncos fan. Steven was an exceptional, devoted and loving son, father, grandfather, great-great-grandfather, brother, uncle, cousin and friend who enjoyed traveling, working with horses and spending time with all of his family and friends. Steven was a friend to all and he will be dearly missed. He will live on through his daughters Jeannie M, (Marlon) King of Pueblo, CO; Geriann (Chris) Sanchez of Colorado Springs, CO; Stephanie Molina-Espinoza of Albuquerque, NM; sons Michael M. Espinoza of Aurora, CO; Richard A. (Lois) Espinoza of Arvada, CO; Steven A. (Adriana) Espinoza of Parker, CO; Jeffery D. (Michelle) Espinoza of Millersville, MD; Dion Espinoza of Albuquerque, NM; Ronald R. (Ingrid S.) Espinoza of Albuquerque, NM; 25 grandchildren, 8 great-0grandchildren, niece Maxine Lopez of Alamosa, CO. He is also survived by numerous nieces, nephews, cousins and friends. Steven was preceded in death by his parents, son Joe Espinoza, brother Maxie Espinoza and sister Lela Sandoval. Cremation was chosen and a memorial service will be held at a later date. To leave condolences please visit romerofuneralhomes.com. The arrangements have been entrusted to Romero Funeral Home of Alamosa.

Alamosa resident Steven Espinoza, 83, went to is eternal rest on August 15, 2020 at the Rio Grande Inn in the company of angels. Steven made his grand entrance into the world on August 16, 1936 in Alamosa, Colorado the beloved son of Jose Maximino... View Obituary & Service Information

The family of Steven Espinoza created this Life Tributes page to make it easy to share your memories.

Send flowers to the Espinoza family.