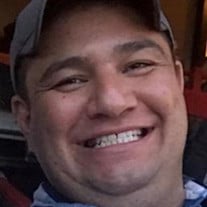 Steven Alan DeHerrera, 36, of Fort Collins, Colorado passed away on December 28, 2021. Steve was born on August 26, 1985 to Alan and Janet DeHerrera. Steve was raised in Alamosa where he attended elementary through high school. Steven was a very bright student from the start. In early elementary school he developed a fascination with the solar system and outer space which drove his interest in science and mathematics. He graduated at the top of his class and went to pursue a Mechanical Engineering degree. Steve attended Adams State College for his first year before transferring to Colorado State University in Fort Collins. Steve excelled at school and went on to obtain his bachelors and master’s degrees in Mechanical Engineering. During his undergrad, Steve secured an internship at Woodward and was hired as a full-time engineer upon his graduation. Steve had an amazing work ethic and went on to obtain several patents during his tenure. Outside of school Steve loved spending time with his family and being in the outdoors. During his adolescent years, he helped his family build a mountain cabin. Many, many hours were spent by the campfire enjoying laughs with friends and family. In high school, Steve met his wife, Rikki, and the storybook romance proceeded from there. Together they enjoyed traveling and visited many states and countries. Their love blossomed and they welcomed two wonderful children, Tatum and Addilyn. Steve was also a firearms enthusiast and spent many hours at the shooting range. He was loved and will be deeply missed by all who knew him. Steve is survived by his wife, Rikki DeHerrera, son, Tatum DeHerrera, daughter, Addilyn DeHerrera, father, Alan (Ann-Marie) DeHerrera, brother, James (Joseph) DeHerrera, in-laws, Rick and Mildred Duran, and numerous aunts, uncles, cousins, grandparents, Godparents, and extended family. Steve was preceded in death by his mother, Janet DeHerrera, grandparents, Pete DeHerrera, Margarito and Juanita Martinez, aunts, Lloyda Flores, Debbie Garcia, uncles, Peter Martinez, Jessie Martinez, Joseph Martinez, Mike DeHerrera and numerous cousins. Due to the pandemic, a small, private service will be held for immediate family members. A larger Celebration of Life for Steven will be held at a later date when circumstances permit. The care of arrangements has been entrusted to Romero Funeral Home of Alamosa.

Steven Alan DeHerrera, 36, of Fort Collins, Colorado passed away on December 28, 2021. Steve was born on August 26, 1985 to Alan and Janet DeHerrera. Steve was raised in Alamosa where he attended elementary through high school. Steven was a... View Obituary & Service Information

The family of Steven Alan DeHerrera created this Life Tributes page to make it easy to share your memories.

Send flowers to the DeHerrera family.