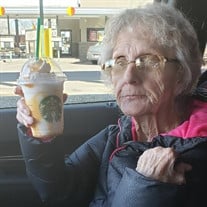 Capulin resident Rozetta Rousey,77, passed away peacefully May 12, 2019 at the Pikes Peak Hospital under Hospice Care surrounded by her loving family. Rozetta was born on September 11, 1941 in Clinton, Illinois, the beloved daughter of George D. Works and Cora Mott Works. She was united in marriage to Clarence Rousey on February 20, 1960 and the two shared a long and happy union until his passing. Rozetta was an exceptional mother, grandmother, great-grandmother, sister, aunt, cousin and friend who enjoyed going to bingo, playing cards, and her grandchildren will always remember her for giving them the Oscar special. Rozetta devoted her life to caring for her family. Her greatest joy in life came from the time she was able to spend with her children, grandchildren, family and friends. She will be dearly missed. From that union they had their children Clarence (Roberta) Rousey Jr., of Capulin, CO; John (Brenda) Rousey of Capulin, CO; Wendy (Eric) Barela of La Jara, CO; Ron (Stacie) Rousey of Heyworth, IL; George (Dennis) Rousey of Fairfield, CA; Penny (Sherman) Cubit of Lee Summit, MO; 12 grandchildren, 17 great-grandchildren and one great-grandchild on the way who she was very excited to meet, sisters Doris Dorsett, Dixie Houser, Faye Toruga and Sue Anderson. She is also survived by many nieces, nephews, cousins and friends. Rozetta was preceded in death by her parents George and Cora Works, her husband of 50 years Clarence Rousey Sr., siblings Joann Hosick, Lena Buyers, Betty Hubble, Chuck Works, grandson Jason Rousey and her best friend and comádre Romancita Valdez. Viewing and visitation will be held on Thursday, May 16, 2019 from 4-8 PM at the Romero Funeral Chapel in Alamosa. A Funeral Service will be held on Friday, May 17, 2019 at 10:00 AM also at the Romero Funeral Chapel in Alamosa. Interment will follow at the Capulin Cemetery.

Capulin resident Rozetta Rousey,77, passed away peacefully May 12, 2019 at the Pikes Peak Hospital under Hospice Care surrounded by her loving family. Rozetta was born on September 11, 1941 in Clinton, Illinois, the beloved daughter of George... View Obituary & Service Information

The family of Rozetta Rousey created this Life Tributes page to make it easy to share your memories.

Send flowers to the Rousey family.