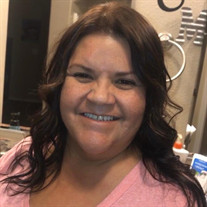 Longtime Del Norte resident Richelle Sue Jaramillo, 50, went to her eternal rest on August 7, 2020 at the Rio Grande Hospital surrounded by her loving family. Richelle was welcomed into the world on July 15, 1970 in Monte Vista, Colorado, the daughter of Richard Tafoya and Marlene Samora Tafoya. After graduating from Del Norte High School and completing two years of college, she went on to work as a administrative assistant for the Rio Grande Department of Social Services and was soon promoted to office manager. Richelle excelled at her career, loved working alongside her daughter and took great joy in being able to help out her co-workers and the department. An exceptional , kind and loving mother, nana, sister, aunt, cousin, nina and friend, Richelle enjoyed going camping, going for drives, fishing, spending time with her children family, and especially her grandchildren. She also liked spending time with her co-workers and being silly throughout the day. Richelle was taken too soon but the memories she left with her family and friends will last a lifetime. She will be dearly missed. Richelle will live on through her parents Marlene and Richard Tafoya of Del Norte, CO; father of her children Michael Jaramillo of Del Norte, CO; daughters Michaela (Joel) Estrada, Maya Jaramillo both of Del Norte, CO; son Michael Jaramillo of Del Norte, CO; grandchildren Jaedyn Estrada, Ethan Estrada both of Del Norte, CO; sister Esperanza (Jared) Maestas of Commerce City, CO; brother Ricardo (Megan) Tafoya of Monte Vista, CO; longtime best friend Liz (Manuel) Tafoya of Grand Junction, CO. She is also survived by numerous nieces, nephews, cousins, godchildren and friends. She was preceded in death by her grandparents John and Julia Tafoya and John and Estrella Samora. Limited viewing and visitation will be held on Thursday, August 13, 2020 from 3-5 PM at the Romero Funeral Chapel in Monte Vista. A Vigil Service with Recitation of the Rosary will be held on Thursday, August 13, 2020 at 7:00 PM at the Holy Name of Mary Catholic Church in Del Norte. A Mass of the Resurrection will be held on Friday August 14, 2020 at 10:00 AM also at Holy Name of Mary Catholic Church. Interment will follow at the Del Norte Cemetery. To leave online condolences please visit romerofuneralhomes.com. The arrangements have been entrusted to Romero Funeral Home of Monte Vista.

Longtime Del Norte resident Richelle Sue Jaramillo, 50, went to her eternal rest on August 7, 2020 at the Rio Grande Hospital surrounded by her loving family. Richelle was welcomed into the world on July 15, 1970 in Monte Vista, Colorado, the... View Obituary & Service Information

The family of Richelle Sue Jaramillo created this Life Tributes page to make it easy to share your memories.

Send flowers to the Jaramillo family.