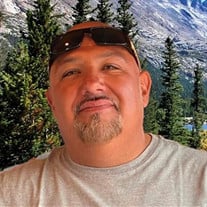 Chama resident Raymond Paul Gurule, 43, passed away September 12, 2021. Raymond was born on March 8, 1978 in Denver, Colorado, the son of Raymond Frank Gurule and Connie C. Gurule. He worked as a manager for GT's Trash Servicve for many years.... View Obituary & Service Information

The family of Raymond Paul Gurule created this Life Tributes page to make it easy to share your memories.

Send flowers to the Gurule family.