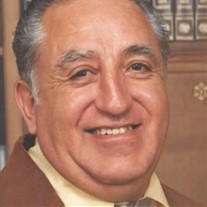 Conejos resident Raymond Camilo Gallegos, 87, passed away October 9, 2018 at his home. Raymond was welcomed into the world on August 31, 1931 in Antonito, Colorado, the beloved son of Simon Gallegos and Beatrice Martinez Gallegos. Raymond served and was a Veteran of the United States Army and served during the Korean Conflict. After he completed his duties in the service, he worked for many years at Gates Rubber Company. Raymond was a compassionate and loving father, step-father, grandfather, great-grandfather, brother, uncle, cousin and friend who enjoyed farming and ranching, going fishing, watching Western's and was an avid Denver Broncos fan. His greatest joy in life was the time he was able to spend with his family and friends. Survivors include his daughter Rachel Gallegos of Denver, CO; step-children Sandra (David) Segura of Thornton, CO; Vicky (Tony) Alvizu of Westminster, CO; Adriana Lopez of Denver, CO; Eudoro (Frances) Olivares of Denver, CO; Oskar (Cynthia) Olivares of Frederick, CO; Martha (Terry) Melonakis; numerous grandchildren and great-grandchildren, sister Charlotte (Lee) Stollsteimer of Westminster, CO; brother Lucas (Betty) Gallegos of Cripple Creek, CO. He is also survived by many nieces, nephews, cousins and friends. Raymond was preceded in death by his parents Simon and Beatrice Gallegos, his wife Virginia Gallegos, five sisters Carolyn Apodaca, Lucy Duran, Martha Gonzalez, Gloria Gallegos and Frances Loza. A Vigil Service with Recitation of the Rosary will be held on Monday, October 15, 2018 at 7:00 PM at Our Lady of Guadalupe Catholic Church in Conejos. A Mass of the Resurrection will be held on Tuesday, October 16, 2018 at 10:00 AM also at Our Lady of Guadalupe Catholic Church. Interment will follow at the La Jara Cemetery.The care of arrangements have been entrusted to Romero Funeral Home of Antonito.

The family of Raymond Camilo Gallegos created this Life Tributes page to make it easy to share your memories.

Send flowers to the Gallegos family.