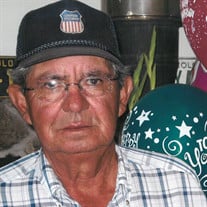 Paul Manuel Archuleta, 76, was born on August 15, 1942 of Ft. Garland, passed away October 28, 2018. He was preceded in death by his parents Sevedao and Ologia Archuleta, his brothers Vicente (Cresanta) Archuleta, Firman Archuleta, Samuel Archuleta, Bardo Espinosa, sister Marie Duran, sister-in-law Marcella (Moses )Clark, Paul Vigil, sister-in-law Anastacia Pacheco, nieces and nephews Joe Archuleta, Leroy Archuleta and Margaret Valdez. He is survived by his loving wife of 57 years Alice Archuleta, daughter Patricia Archuleta, grandchildren whom he raised as his own Mike (Samantha Sandoval) Sanchez and Benjamin Sanchez. He also had a special bond with six great-grandchildren Ben Sanchez Jr., Melissa Cordova mother of granddaughters, Aleigha, Jamie and Michael Sanchez, Nehemiah and Issarey Wilson. He also had a special bond through marriage to Marcella Vigil and her family. He was also a loving uncle to many nieces and nephews Manuel (Jessica) Archuleta, Doro (Pat) Archuleta, Bertina Archuleta, Kathy Archuleta, David (Henrietta) Archuleta, Ricky (Bernice) Archuleta, Laura Bueno, Dolly Archuleta, Tommy Archuleta. He also had many close friends Robert and Carmileta Gallegos and family, Bill and Paul Hicks and family. Salina Pacheco who was by his side until the very end, as well as his beloved dog Honey. He found his place as a young man in the same line of work as his father-in-law Bernabe Vigil. As a railroader for 38 years working for the railroad as it changed hands in mergers from Denver and Rio Grande Main to Denver and Rio Grande Western Railroad to Southern Pacific Railroad to Union Pacific Railroad to Burlington Northern Santa Fe Railroad. Retiring in 1997, allowing him to devote his time and energy to the true passions of his giant heart, #1 his family. He was always caring and loving, side by side with his loving wife Alice. Teaching by example, always leading in the direction of success. During this time he also spent 12 years on the Sierra Grande School Board. As a very skilled angler, he sought out the waters of Colorado finding a sort of quiet peace that is so rare on this earth. Passing on his knowledge to his family, but also to anyone who wanted to learn. Another passion he had was looking for Native American artifacts with his family. Humbly passing time in deep conversation all over the Colorado landscape. A Graveside Service will be held at the Ft. Garland Cemetery on Friday, November 2, 2018 at 1:00 PM.

The family of Paul Manuel Archuleta created this Life Tributes page to make it easy to share your memories.

Send flowers to the Archuleta family.