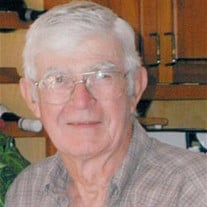 Alamosa resident of 45 years, Norwon D. Emerick (Norm, Dean, Dad), passed away peacefully on December 11, 2018, at the San Luis Care Center in Alamosa, CO. He was born on November 10, 1933 in Phillipsburg, Kansas, the son of Vincent C. Emerick and Lavera E. Brown. The family moved to Aurora, Colorado where he graduated high school in 1951. On February 15, 1952, he married his childhood sweetheart and the love of his life of 66 years, Shirley Lee Rice, and together they had 3 children. Following graduation, he began his lengthy career of 61 years in the automotive and trucking industries. He started at Ringsby in Denver, CO in 1951 as a mechanics helper. From 1952 to 1970 he worked for Navajo Freight Lines in Denver and from 1970 to 1973 at Ellis Truck Lines of Indianapolis, Indiana (a division of Navajo Freight Lines). He began as a mechanic who serviced trucks and then moved up to Partsman, Part Manager, Rebuilt Foreman, Central Maintenance Supervisor Assistant, to eventually, Superintendent of Maintenance in a 4-state region. In 1973, he moved his family to Alamosa, Colorado where he, along with his childhood friend, Andy Kirkegaard, and both of their wives, ran Valley Parts House until selling in 1989. From 1989 to 2013 he held various jobs in the automotive parts business working for Valley Parts under new owners, at Car Quest, for the Big A Parts stores in Center and Monte Vista, CO, and eventually, ending up at Parts Plus in La Jara, Co. He finally retired at 79 years of age. He dearly loved his work and always strived to help people get back on the road again. Norm believed in the birth, death, and resurrection of Christ and that belief was evident in his life as an honest, hard working, compassionate man who deeply loved his family and friends, a man who always helped people, even if he did not know them. He was widely known as an incredibly knowledgeable guy and a great mechanic, a man who loved a good joke and loved to tease, a man who loved big rigs and large diesel engines, and of course, a man who loved Chrysler and Dodge over Ford. When he wasn't working, he was rebuilding , repairing, and maintaining vehicles, and helping others to do the same. He also enjoyed hiking, walking, camping in his younger days, watching football, and telling big stories. He and Shirley, along with their longtime friends, Andy and Phyllis Kirkegaard, spent many winters in Yuma, AZ, being snowbirds and helping those around them with their car problems. He will be deeply missed by his family, his friends, and all who knew him. He is survived by his wife, Shirley of Alamosa, CO; his son, Phillip Emerick, Alamosa, CO; his daughters, Adina Free, Lancaster, CA, and Donna Cryer Cox (Howard), Del Norte, CO; his brother, Duane Emerick (Pauline), Grande, NC; three grandchildren, Keri Free, Lancaster, CA, Kandi Barrell (Brian), Monticello, UT, and Clark Free (Amanda), Calhoun, KY; five great grandchildren, Seamis Barrell, Eldean Lammert, HayLee Free, Degan Free, Danyella Free; sisters-in-law, Phyllis Hall, Cahone, CO, and Bernita Rice, Aurora, CO; by many of his nieces, nephews, and cousins; by the children of Andy and Phyllis Kirkegaard, Sheryl Suhr (Rick), Aurora, CO and Larry Kirkegaard (Joanne), Aurora, CO; and by many of his other dear friends and family. He was preceded in death by his parents, grandparents, uncles, aunts, cousins, two brothers-in-law, and his long time friends, Andy, Phyllis, and Kenny Kirkegaard. Cremation was chosen and a memorial service will be held on January 19, 2019 at College Heights Baptist Church, Alamosa, Co, with notice of time and details to follow. To leave online condolences please visit romerofuneralhomes. com. In lieu of flowers, donations can be made to the Lupus Foundation of America or College Heights Baptist Church, Alamosa, CO.

The family of Norwon D. Emerick created this Life Tributes page to make it easy to share your memories.

Send flowers to the Emerick family.