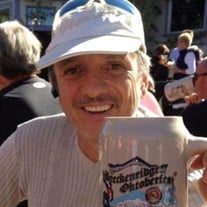 Romero Valley Funeral Home, Inc. 1407 State Ave. Alamosa, CO. 81101 719-589-9200---April 8, 2019 Obituary: Michael B. Trujillo Michael Ben Trujillo from Brighton, Colorado, and former Manassa, Colorado, resident passed away April 6, 2019 in Seattle, Washington. Michael was welcomed into the world as the beloved son of Adam D. Trujillo and Della G. Martinez Trujillo. Michael was an exceptional husband, father, grandfather, brother, uncle, cousin and friend who enjoyed doing missionary work, gardening, driving his corvette and, above all, he loved spending time with his family and friends. Michael started MBR along with his brother Ray in 1986, he worked tirelessly to make his company a house hold name in the constructing industry. Because of his will he was able to bless many from MBRs success which was one of his greatest achievements along with his great love for God. He was a giant among men with the heart of an angel. He will be dearly missed by everyone. Survivors include his loving wife Carmen Trujillo of Brighton, CO; daughters: Holly Lopez (Husband) Adam Lopez, Sarah Trujillo (Fiancé) Darrius Fugere, and Gloria Resendez (Husband) Richard Resendez of Denver, CO; sons: Michael Trujillo Jr, Ezekiel Trujillo of Denver, CO; seven grandchildren: Esperanza Lopez, Lilly Trujillo, Enrique Lopez, Jaeden Trujillo, Michael Trujillo Jr, Carter Resendez, and Grace Resendez, his sisters Sofie Schaub of Denver, CO, Cecilia (Ron) Lujan- Ewing of Pueblo, CO; and one brother Ray Trujillo of Arvada, CO. He is also survived by several nieces, nephews, cousins and friends. Michael was preceded in death by his parents Adam and Della Trujillo, infant son Michael John Trujillo, infant daughter Belle, Hannah Elizabeth Trujillo, and brothers Tommy, Tony, Eddie and Adam. Viewing and visitation will be held on Friday, April 12, 2019 from 1-5 PM at the Romero Funeral Chapel in Alamosa, CO. A Vigil Service with Recitation of the Rosary will be held Friday, April 12, 2019 at 7:00 PM also at the Romero Funeral Chapel in Alamosa, CO. A Mass of the Resurrection will be held on Saturday, April 13, 2019 at 10:00 AM at St. Joseph Catholic Church in Capulin, CO. Interment will follow at the Capulin Cemetery in Capulin, Colorado. To leave online condolences please visit romerofuneralhomes.com. The care of arrangements have been entrusted to Romero Funeral Home of Alamosa.

The family of Michael Trujillo created this Life Tributes page to make it easy to share your memories.

Send flowers to the Trujillo family.