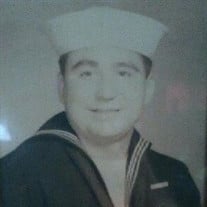 Center resident Junior Matthew Gomez, 73, passed away peacefully on February 19, 2020 at the Rio Grande Hospital with his loving family by his side. Junior was born on December 12, 1946 in Alamosa, Colorado, the son of Matthew Gomez and Josephine Benavidez Gomez. Junior served and was a veteran of the United States Navy and he served during the Vietnam War. After his duties in the service were completed he was united in marriage to Mary E. Sisneros. He worked for many years as a truck driver and a member of the V.F.W. and the Knights of Columbus. Junior was an exceptional and loving husband, father grandfather, great-grandfather, brother, uncle, cousin and friend who enjoyed going fishing, hunting, traveling, being in the mountains and most of all spending time with his family. He will be dearly missed. Survivors include his wife Mary E. Gomez of Center, CO; daughters Geraldine Locke of Utah; Barbara (Pat) Uliberri of Center, CO; Karen (Amy)Gomez of Denver, CO; Shawnee Wolf of Center, CO; sons Christopher (Sandy) Gomez of Sulphur, OK; Garrett (Sammi) Winburn of Center, CO; 14 grandchildren, 2 great-grandchildren, sister Joan Romero of Lafayette, CO; brothers Bobby Gomez of Rifle, CO; Dave Gomez of Capulin, CO; Albert (Roanne) Gomez of Antonito, CO; Allen Gomez of Lafayette, CO; Matthew Gomez of Longmont, CO. He is also survived by numerous nieces, nephews, cousins and friends. Junior was preceded in death by his parents Matthew and Josephine Gomez, one son Lawrence Espinoza, brothers Lloyd, Luis and Jerry Gomez, and one sister Joan Romero. Cremation was chosen and services will be held at a later date with full military honors.

Center resident Junior Matthew Gomez, 73, passed away peacefully on February 19, 2020 at the Rio Grande Hospital with his loving family by his side. Junior was born on December 12, 1946 in Alamosa, Colorado, the son of Matthew Gomez and Josephine... View Obituary & Service Information

The family of Matthew Gomez created this Life Tributes page to make it easy to share your memories.

Send flowers to the Gomez family.