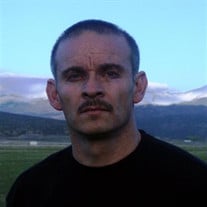 San Luis resident Mathew Lynn Valdez, 57, went to his eternal rest on May 5, 2019. Mathew was born on May 28, 1961 in Alamosa, Colorado, the beloved son of Evan Valdez and Louisa Arellano Valdez. Mathew graduated with a BA in History and Government from Adams State University. Mathew served and was a veteran of the United States Army. After his completion of his duties in the service, he moved to Denver and worked as a paralegal before returning to San Luis. He worked for Costilla County as the Land Use Administrator for 18 years where he became well known in the community. For the past two years he was the executive director of the Sangre de Cristo Acequia Association.He was a member of the Knights of Columbus of San Luis, Los Herederos, the Land Rights Council, Adelante San Luis, and Chair of the Costilla County Democratic Party. Mathew was a free spirit, a kind hearted and loving brother, cousin and friend who enjoyed riding his bike, working on the farm, he loved reading and was a history buff. He was an avid sports fan. His favorite teams were the Denver Broncos, Colorado Avalanche and Denver Nuggets. Mathew also loved being outdoors, in the mountains and going hunting. He will be dearly missed. Survivors include his sisters Dana (Huberto) Maestas of San Luis, CO; Bernadette Valdez of Longmont, CO; Maria (Charles) Bloomfield of Boulder, CO; brothers Roland Valdez (Lisa Staffiero) of Pueblo, CO; Evan Valdez Jr. of Santa Fe, NM. He is also survived by many nieces, nephews, cousins and friends. Mathew was preceded in death by his parents Evan and Louisa Valdez, maternal grandparents Felipe Martinez, Magdalena Arellano, paternal grandparents Lucy and Anastacio Valdez and one niece Adrianna Valdez. A Vigil Service with Recitation of the Rosary will be held on Friday, May 10, 2019 at 7:00 PM at the Sangre De Cristo Catholic Church in San Luis. A Mass of the Resurrection will be held on Saturday, May 11, 2019 at 10:00 AM with full Military Honors.

San Luis resident Mathew Lynn Valdez, 57, went to his eternal rest on May 5, 2019. Mathew was born on May 28, 1961 in Alamosa, Colorado, the beloved son of Evan Valdez and Louisa Arellano Valdez. Mathew graduated with a BA in History and Government... View Obituary & Service Information

The family of Mathew Lynn Valdez created this Life Tributes page to make it easy to share your memories.