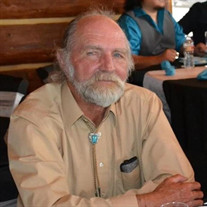 Life-long San Luis Valley resident, Marvin Goad, went home to be with the Lord, with his loving family by his side, on August 4, 2021. He was born in Monte Vista, CO on July 17, 1956, to Donald “Donnie” Goad and Ruth Kell Goad. He was raised in Monte Vista, CO and graduated from Monte Vista High School in 1974. After high school, he went to work at the sawmill in South Fork, CO. During his 25 years at the sawmill he became a skilled heavy machinery operator. It was also during this time that he met his future wife of 42 years, Lorraine Campos. They settled in Del Norte, CO where they raised their three children. After the closure of the sawmill in 2000 he attended Trinidad State Junior College in Alamosa, CO and earned an Associate Degree in Computer Information Systems. Soon after obtaining his degree, he landed his dream job as an Archeology Technician for the Department of Interior, Bureau of Land Management and received several awards for his outstanding performance. Marvin was a gifted artist and his passion for archeology and geology extended well beyond the workplace. As a young man Marvin started drawing arrowheads with meticulous detail which led him to illustrate for several archeological institutions including the Smithsonian Institution/National Museum of Natural History and the Great Sand Dunes National Park and Preserve. Marvin also became an accomplished flintknapper in order to further his skill as a lithic illustrator. Marvin was self-taught and researched endlessly the subjects of archeology, geology, astronomy and remedios. Marvin was also well read in God’s word and was a member of Beth Yeshua International Congregation. In his free-time he enjoyed tending to his flower garden, bird-watching, fishing, camping and spending time in the high country with his family. Although a quiet man, Marvin was well loved and made friends everywhere he went. Marvin was so very proud of his three children and two granddaughters and their accomplishments. He is preceded in death by his father Donnie and his brother Melvin. He is survived by his mother Ruth Goad of Monte Vista, CO, his wife Lorraine, his sons, Alfonso (Erin) Goad of Yellow Jacket, CO and Josh Goad of Del Norte, CO, his daughter, Elesha (Matt Causey) Goad of South Fork, CO, his granddaughters, Jessica (Ben) Lykins of Cortez, CO and Julieanna Goad of Yellow Jacket, CO and great granddaughter, Kiara Lykins of Cortez, CO. He is also survived by many loved cousins, brother and sister in-laws, uncles, aunts, nephews and nieces. A memorial service will be held at the New Life Fellowship in Del Norte, CO at 10:00 a.m. on August 21, 2021 (520 7th Street). A reception will follow at the Rio Grande Club Fishing Lodge in South Fork, CO (6710 River Club Drive). Memorial contributions can be made to the Rio Grande Hospital (Valley Citizens Foundation for Health Care) in honor of Marvin Goad. To leave online condolences please visit romerofuneralhomes.com. Romero Funeral Home of Monte Vista has been entrusted with care of arrangements.

The family of Marvin Goad created this Life Tributes page to make it easy to share your memories.

Send flowers to the Goad family.