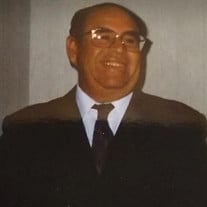 Maclovio C. Martinez, formerly of San Acacio, CO, died on August 4, 2021 at Victor Valley Medical Center in San Bernardino, California. He was born May 5, 1932 in San Acacio, Colorado to Maclovio Martinez and Francisca Arguello. He married Ida on February 2, 1963 in Caacupe, Paraguay. Maclovio attended elementary school in San Acacio, and graduated from Mercy High School in San Luis, CO. He joined the U. S. Air Force in 1951, training in cryptography and teletype, and served honorably until he was discharged in 1956. From 1956 to 1959 he worked for the New Mexico National Guard for the U.S. Property and Fiscal Office. In 1959-he joined the Department of State and was assigned to the 1964 -Consul General in Dacca, East Pakistan, (Bangladesh today). Was Communication Supervisor until end of tour. He then transferred to the American Embassy in Asuncion, Paraguay where he was While in Assistant Disbursing Officer for the Embassy, and the Agency for International Development In 1964 he resigned his position at the American Embassy and remained in Paraguay as a private individual where he engaged in ranching activities until 1973 when he returned to the United States. He attended ASU in Alamosa and earned a Business Education Major and a Minor in Spanish, and an MA in Guidance and Counseling. In 1983 he got into politics and was elected Costilla County Assessor for five terms, and was elected by his peers to be advisor to the State Property Tax Administrator. He also worked as a fee appraiser and managed the development and construction business. He was President and founder of a Health Care Foundation, President of the San Luis Museum and Cultural Center, President and Founder of the Costilla County Conservancy District, Editor of the Comet Newsletter, a Korean War Veterans Association and Publisher of the Costilla County Official Newspaper, La Sierra. Maclovio is survived by his wife, Ida, sons Francisco M., Fernando M. and Teresita Martinez, and grandchildren, Maclovio A., Carolina F., Lorena M., and Alexander F., Fernando A. and Arasy A. (all Martinez). Also survived by sisters Monica (Bob) Tucker, and Rebecca (Chris) Guillen. He was preceded in death by his parents, and sibling Genevieve (Archie) Garcia.. Funeral services will be held on Saturday, August 21, 2021 at Sangre de Cristo Parish in San Luis, CO. Rosary will begin at 9:30 a. m., with mass to follow at 10:00 a. m. Burial will be at San Acacio Cemetery in San Acacio, CO. To leave online condolences please visit romerofuneralhomes.com. The care of arrangements has been entrusted to Romero Funeral Home of San Luis.

The family of Maclovio C. Martinez created this Life Tributes page to make it easy to share your memories.

Send flowers to the Martinez family.