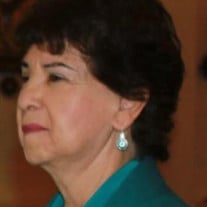 Lorraine Nora Dominguez, 80 of Capulin, CO passed away peacefully on February 9, 2022. Lorraine was born on February 8, 1942, to Jose Antonio and Ana Maria Dominguez in, Capulin, CO where she grew up, attended school, and met and married the love of her life, Chuck Dominguez on November 8, 1958. They welcomed 3 children to their family, Corinne, Martin and John “JD”. Most people will remember her for the 36 years she worked at the La Jara Trading Post where people knew her as “The Paint Lady”. She made lots of friends that become like family to her. She spoke of many of you, fondly. Lorraine and Chuck enjoyed vacationing in Las Vegas, NV and Laughlin, NV with her sisters and their husbands. She enjoyed going to bingo with friends and working crossword puzzles. She was known as everyone’s Avon Lady for many years. She enjoyed gardening until Parkinson’s made it difficult for her to get around. She belonged to the Sisters in Christ Ministry where she cooked and served many dinners alongside a great group of ladies. Lorraine was preceded in death by her husband Chuck, her parents, 1 grandson Jacob Luke Dominguez, 2 brothers Emilio and Rudy Dominguez, and 1 sister Cora Trinnier. She is survived by: her children Corinne (Ben) Sandoval of Capulin, CO, Martin Dominguez of Alamosa, CO, JD (Melissa) Dominguez of Alamosa, CO; 8 Grandchildren, 16 Great-Grandchildren, 2 Great-Great-Grandchildren; 5 sisters Claudette Archuleta Denver, CO, Helen Velasquez Arvada, CO, Ana Marie Kemper Wheat Ridge, CO, Kathy Dominguez Wheat Ridge, CO, Veronica Dominguez, San Jacinto, CA, and many Godchildren, nieces, nephews, and friends that she loved dearly. A vigil service with Recitation of the Rosary will be held on Friday, February 18, 2022 at 7:00 PM at St. Joseph Parish, Capulin, CO. Cremation was chosen and internment will take place at a later date.

Lorraine Nora Dominguez, 80 of Capulin, CO passed away peacefully on February 9, 2022. Lorraine was born on February 8, 1942, to Jose Antonio and Ana Maria Dominguez in, Capulin, CO where she grew up, attended school, and met and married the... View Obituary & Service Information

The family of Lorraine Nora Dominguez created this Life Tributes page to make it easy to share your memories.

Send flowers to the Dominguez family.