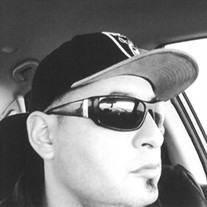 Lorenzo Antonio Pacheco, 40, was born on May 1, 1981, in Alamosa the first born child of Richard and Marie Pacheco, and passed away on August 26, 2021. While his time on earth was short, his spirit and the impact he had on others will live on forever. An avid sports fan, Lorenzo knew and could recount statistics, wins, losses and the best players for football, basketball, and other sports. His early support of the Las Vegas Raiders never faltered. Sunday dinners at his father’s home with his daughter, sister, brother-in -law, nieces, nephew, and paternal grandmother, were one of the things he always looked forward to and enjoyed immensely. Growing up on the Forbes Trinchera Ranch instilled a love for the outdoors and a keen appreciation of wildlife. Lorenzo graduated from Sierra Grande High School. He attended Adams State University while at the same time raising his beloved daughter as a single parent, and working in various construction projects with his father. The elderly held a special place in his heart, and he especially enjoyed remodeling their homes to ensure that any disability or accommodation was taken care of. He recently worked at the District Attorney’s office. Lorenzo is survived by his daughter, Victoria Pacheco, step-daughters Jannelle Flores and Genna Aguilar both of Alamosa, CO; his father, Richard Pacheco from Fort Garland, CO, his sister, Ana Pacheco-Sarmiento, brother-law Nicolas Sarmiento, nieces Mariza, Olivia, and Eliana, and nephew Antonio, all from Alamosa. He is also survived by his paternal grandmother, Anna Maria Pacheco from Blanca, CO, as well as numerous uncles, aunts, God children, cousins, and friends. He is preceded in death by his beloved mother Marie Pacheco, his maternal great grandmother, Sara Salas, his maternal grandmother, Della Gallegos, and his paternal grandfather Ruben Pacheco. Vigil Service with Recitation of the Rosary will be held on Friday, August 3, 2021 at 7:00 PM at Holy Family Catholic Church in Ft. Garland. A Mass of the Resurrection will be held Saturday, September 4, 2021 at 10:00 AM at Sangre De Cristo Catholic Church in San Luis. Interment will follow at the Sangre De Cristo Cemetery. In lieu of flowers please make donations in Lorenzo's name to the Sangre De Cristo building maintenance fund. To leave online condolences please visit romerofuneralhomes.com. The arrangements have been placed in care of Romero Funeral Home of San Luis.

Lorenzo Antonio Pacheco, 40, was born on May 1, 1981, in Alamosa the first born child of Richard and Marie Pacheco, and passed away on August 26, 2021. While his time on earth was short, his spirit and the impact he had on others will live... View Obituary & Service Information

The family of Lorenzo Antonio Pacheco created this Life Tributes page to make it easy to share your memories.

Send flowers to the Pacheco family.