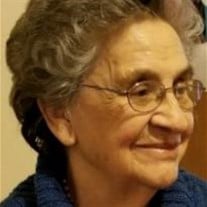 Liva “Leigh” Gonzales Our beloved mother, grandmother, sister, aunt and friend peacefully passed away in her home on December 9, 2018 in Aurora, CO. She was surrounded by her loving family. Liva was the daughter of Juan and Evarista Maestas, born on April 15, 1934 in San Pablo, CO. Liva was united in marriage to Jake Gonzales on December 3, 1955. Liva worked in the Monte Vista Hospital and St. Joseph Hospital in Del Norte as a nurse’s aide for many years. Our loving Matriarch walked through life honoring our Heavenly Father by sharing prayer, compassion, feeding the hungry and guiding by example the virtues of life. She and Jake were active participants for many years with the San Luis Valley Cursillo as well as the Cursillo in Denver, CO. She loved spending time having fun outdoors with her flowers, playing with her grandchildren, cooking, dancing and taking long walks. Finally, she loved the Broncos, mountains, camping and fishing. Liva is survived by her 5 children; Alan (Sandra) of Pueblo, CO, Richard of Albuquerque, NM, Teresa (David) of Aurora, CO, Julie (Art) of Aurora, CO and Shirley, of Aurora, CO. She is also survived by 26 grandchildren and 39 great grandchildren. Liva is also survived by sisters Mercy, Rose, Lita (Leandro) and Lydia and brothers Ruben (Francis), Paul. Liva was preceded in death by her husband, Jake in 2000, 2 granddaughters, her parents along with 3 sisters and 5 brothers. Rosary vigil will be held Friday, December 14, 2018 at 7:00 p.m. Mass will be held on Saturday, December 15, 2018 at 10:00 a.m. both at St. Joseph’s Catholic Church in Monte Vista, CO. The internment at Monte Vista Cemetery following the mass.

Liva &#8220;Leigh&#8221; Gonzales Our beloved mother, grandmother, sister, aunt and friend peacefully passed away in her home on December 9, 2018 in Aurora, CO. She was surrounded by her loving family. Liva was the daughter of Juan and Evarista... View Obituary & Service Information

The family of Liva Leigh Gonzales created this Life Tributes page to make it easy to share your memories.

Send flowers to the Gonzales family.