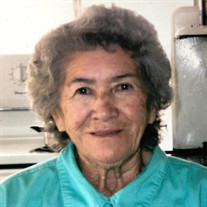 San Luis resident Licia Vigil, 92, went home to be with the Lord on September 2, 2020. Making her grand entrance into the world on June 2, 1928 in Arroyo Hondo, New Mexico, the daughter of Gabriel Romero and Domitila Vigil Romero. Licia will... View Obituary & Service Information

The family of Licia Vigil created this Life Tributes page to make it easy to share your memories.

San Luis resident Licia Vigil, 92, went home to be with the Lord...

Send flowers to the Vigil family.