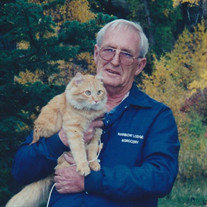 South Fork resident Lawrence Denton Fleming Jr., 84, went to his eternal rest on January 21, 2021 surrounded by loved ones at his home in Chandler, Arizona. Lawrence “Junior” made his big entrance into the world on July 15, 1936 in Alamosa, Colorado; the beloved son of Lawrence Denton Sr. and Esther Rogers Fleming. After graduating from Del Norte High School, Junior went on to obtain his Bachelor's Degree in Petroleum Engineering at New Mexico School of the Mines and Forst Lewis College. He later went on to continue running his family’s store, the well known and loved Rainbow Lodge and Grocery in South Fork. Junior liked to joke that the closest he became to a petroleum engineer was pumping gas for customers at Rainbow; your one stop shop as everyone would call it. He loved being able to make new friends while working at the store as well as interacting daily with members of the wonderful community. He enjoyed having his morning coffee with his buddies at Blimpie. He was a member of the B.P.O.E. and was active with the South Fork Fire and Rescue for 35 years. Lawrence was a devoted, compassionate, hard-working man, a loving father, grandfather, brother, uncle, cousin, companion and friend. Junior enjoyed spending time with his family and friends, golfing, RVing with Betty and his cat Burnie to National Parks, taking Jeep tours, 4-wheeling in the mountains, going for helicopter rides over Hawaii, playing cards with his friends at Sunbird, taking cruises and traveling to Canada, Mexico and Alaska. Junior loved Country Western music and had an extensive John Wayne collection. He will live on through his son Lawrence Denton (Marie)Fleming III of South Fork, CO; granddaughter Samantha Renee’ Fleming of Austin, TX; sister Drenda (Terry) Murchison of Florence, CO; brother Howard (Carole) Fleming of South Fork, CO; his loving companion Betty Gillham of Oregon; step-daughters Vicki Xericos and Rebecca Donafrio with their families. He is also survived by many nieces, nephews, cousins and friends. Lawrence was preceded in death by his parents Lawrence and Esther Fleming Sr., wife DeeAnn, son Terry Lynn, grandson Lawrence Denton Fleming IV and also his beloved cat Burnie. A private family services will be held due to COVID restrictions. In Lieu of flowers please make donations to South Fork Fire and Rescue or the Alzheimer's Association (ALZ.org). To leave online condolences please visit romerofuneralhomes.com. The care of arrangements have been entrusted to Romero Funeral Home of Monte Vista

South Fork resident Lawrence Denton Fleming Jr., 84, went to his eternal rest on January 21, 2021 surrounded by loved ones at his home in Chandler, Arizona. Lawrence &#8220;Junior&#8221; made his big entrance into the world on July 15, 1936... View Obituary & Service Information

The family of Lawrence Denton Fleming Jr. created this Life Tributes page to make it easy to share your memories.

Send flowers to the Fleming family.