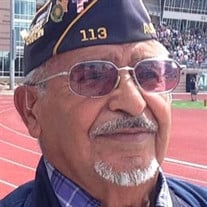 Longtime Alamosa resident, Joseph Frank "Boogie" Romero, 88, was called home on April 13, 2022. Boogie was welcomed into the world on September 10, 1933 in Alamosa, Colorado, the beloved son of Juan Romeo and Edulia Martinez Romero. After graduating from Alamosa High School, boogie went on to serve in the United States Army during the Korean War. Boogie made many lifelong friends who served in battle alongside him. He was united in marriage to Dorothy E. Gonzales in 1955 in Taos, New Mexico. They shared a happy and loving union until her passing. Boogie was a member of the American Legion, Dicky Springer Post #113 as well as the Elks Lodge #1297. Boogie was a friend to everyone, he was always the first to lend a helping hand to anyone in need. He enjoyed going fishing, hunting, playing Texas hold'em and going gambling. He was a fan of all sports, and was an avid Denver Broncos fan. He liked volunteering and was a board member of the Alamosa Spanish Cemetery for over 30 years. He was also the former president for the Alamosa Senior Center. He was well known in the community for aiding with the honor guard as a Chaplin for all military funerals, helping out at sporting events at Adams State, Trinidad State Junior College and the Alamosa High School. He also enjoyed calling Bingo at the Alamosa Care Center as well as the Bridge. Anytime there was a military function going on, Boogie was always there to lend a helping hand for anything that was needed. His greatest joy in life came from the time he was able to spend with his family and friends. He will be dearly missed. His legacy will live on through his son Frankie Romero "Boogie Jr." of Alamosa, CO; daughters Vickie Romero and Lydia (Kurt) Friese both of Colorado Springs, CO; 4 grandchildren and two great-grandchildren. He is also survived by many other extended family members and friends. Boogie was preceded in death by his parents Juan and Edulia Romero, wife Dorothy Romero, son Charles Lynn Romero, sister Teresita Maestas, brothers Manuel Romero and Gilbert Romero. Viewing and visitation will be held on Monday, April 18, 2022 from 1-4 PM at the Romero Funeral Chapel in Alamosa. A Vigil Service with Recitation of the Rosary will be held on Tuesday, April 19, 2022 at 12:30 PM at Sacred Heart Catholic Church in Alamosa. Mass of the Resurrection will follow at 1:00 PM also at Sacred Heart Catholic Church. Interment will follow at the Alamosa Cemetery with full military honors. In lieu of flowers please make donations to Dicky Springer Post #113 American Legion to P.O. box 565, Alamosa, CO. 81101. To leave online condolences please visit romerofuneralhomes.com. The care of arrangements has been entrusted to Romero Funeral Home of Alamosa.

The family of Joseph "Boogie" Frank Romero created this Life Tributes page to make it easy to share your memories.