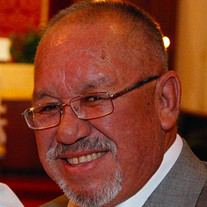 Jose (Michael) Montano, 70, passed away peacefully August 6, 2019 with his loving family by his side in San Diego, California- originally from La Jara, Colorado. At the age of 17 he enlisted in the Navy and served for 21 years, which included... View Obituary & Service Information

The family of Jose Miguel Montano created this Life Tributes page to make it easy to share your memories.

Send flowers to the Montano family.