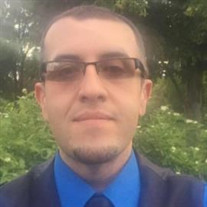 Aurora resident and Beloved son, brother, nephew and friend Jonathan Mark Abeyta, 38,passed away unexpectedly on April 26, 2020, at the Aurora Medical Center. Jon was born on March 1, 1982, in Alamosa, Colorado to Anthony, Sr. and Loki (Martinez) Abeyta. He was raised for the first seven years of his life at the family home in Sanford. Jon was in second grade when they moved to Denver. Jon graduated from Smoky Hill High School in 2000 and went on to the University of Northern Colorado, where he studied computer science. Jon will be remembered for his independent spirit, hilarious laugh, and extraordinary talents. He never met a person who was not instantly his friend. Jon loved to play jokes on people and could always be counted on to give the BEST advice. He was also an amazing cook and could fix any cell phone or computer problem. He is survived by his mother, Loki, and brother, Anthony Jr. “Gordi”, both of Aurora. He is also survived by bonus siblings, Renee Vigil and Joe Martinez, his special hito, Emmanual Vigil, his aunt and favorite person to pick on, Clara Martinez, and many other aunts, uncles, cousins, and friends. He was preceded in death by his father, Anthony Sr., and his grandparents Jose Dionicio and Cleotilde (Manzanares) Martinez and Alfred and Bernice (Lovato) Abeyta. Because of the COVID-19 outbreak, the family has chosen to have a private memorial service. Romero Funeral Home in Alamosa is handling the arrangements. In lieu of flowers, memorial contributions can be made to the American Diabetes Association, www.diabetes.org/donate. To leave online condolences please visit romerofuneralhomes.com. The care of arrangements have been entrusted to Romero Funeral Home of Alamosa.

The family of Jonathan Mark Abeyta created this Life Tributes page to make it easy to share your memories.

Send flowers to the Abeyta family.