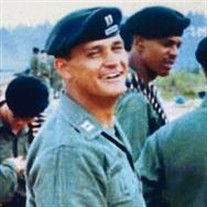 Joe P. Garcia (November 4, 1936 – February 4, 2021) died unexpectedly during medical transport on a helicopter flight from Alamosa to Colorado Springs. He was 84. Joe’s was a life well lived -- one of integrity, hard work, fairness and generosity. He was a brilliant leader and a thoughtful man, whose compassion for the people of the San Luis Valley lived deeply in his heart. Joe was born in Alamosa, the third child of José Procopio Garcia (1899–1962) and his wife Mary Lewis Garcia (née Lewis; 1908-1987). Named after his father, Joe was known as “Junior” to many in his family. Joe met his future wife Maria Genevieve Abeyta at Alamosa High School, with whom he shared his life for over six decades. Prior to their marriage and after his graduation in 1954, Joe served in the Armed Forces (Army) as a Green Beret and with the 101st and 82nd Airborne, graduating from the Ft. Sill Artillery Officer School and Ft. Bragg Special Forces Warfare Center. Upon completion of his early military service, Joe was recruited by legendary Coach Joe Vigil (long-distance running coach for the U.S. Olympic Team), who recognized his abilities as an athlete and set up Joe with a football scholarship to attend Adams State College. Throughout, Coach Vigil encouraged and fostered Joe’s natural leadership talents and passion for equal education. He graduated in 1961 with a Bachelors of Arts in Secondary Education. It was in Alamosa that Joe also grew his own family with Genevieve. They have 3 sons: Leo Vigil Garcia (Santa Monica, CA), Dennis Joseph Garcia (Malibu, CA), and Richard Anthony Garcia (Alexandria, VA). Joe started his career as a teacher and head coach at Antonito High School in 1961, leading the “mighty mighty Trojans” to legendary victories and several near perfect sea-sons through 1964. Joe inspired his players to be their best and his legacy includes the proud title of “Coach,” as his players remember him today. He did the same at San Luis Centennial High School from 1966-67. Joe continued his military service as an Officer in the U.S. Army National Guard and served as the Company Commander of the 3-157th Field Artillery Unit, Colorado Army National Guard in the San Luis Valley. He also served with Special Forces (Green Be-ret) Co B, 5th Special Force Battalion, in Pueblo, CO, until 1968, when he retired his military service as rank of Captain. Joe then moved his family and expanded his career pursuits to further his impact on cultural and racial disparities in the U.S. education system, primarily within Latino/Hispanic communities. In California, Joe worked directly alongside labor leader and civil rights activist César Chávez to recruit college eligible children of California farmworkers to the Claremont Colleges. This was followed by work in Washington DC, where he began with the Department Of Economic Opportunity as a Program Manager and Analyst and swiftly moved upward and onward through the Department of Labor, as a Program Manager and the Department Of Agriculture, as a Policy Analyst in Rural Development. After working under both Democratic and Republican administrations, in 1981 Joe received Senior Executive Status as a Ronald Reagan Presidential Appointee to the Small Business Administration, in the Policy and Budget Division. Joe’s natural leadership and business skills were bolstered by his time in government, leading him to seek graduate study that would further hone his skills for leading with integrity and distinction in a business sector. Armed with a Master of Arts degree in Public Financial Management from American University in Washington D.C., Joe founded Research Management Corp. (RMC) in 1983, building it into a 600-employee government contracting firm. In 1996, Joe returned to his beloved hometown of Alamosa, where he opened Old West Café in the historic Walsh Hotel. His last business venture, this restaurant was an embodiment of his love for the local community. In retirement, Joe loved his garden, his aspens, and the feel of his land beneath his hands as he planted. His optimism was never ending. He loved his grandchildren, Sam Garcia (of Alexandria, VA), Isabella Garcia (of New Orleans, LA), Vitoria Garcia (of New Orleans, LA) and Elizabeth Garcia (of Alexandria, VA) and delighted in their successes. He was in the process of building a bench in his garden where he and his beloved wife could sit and enjoy the view. His last words were “I love you” to his wife – a true love story that has no ending. In his final days, Joe was in the process of completing his book, embodying his never-ending passion and journey to do the good work of resolving societal inequities, particularly in education. He strived to help create a fair playing field, so that all could truly have an equal start. We are grateful and truly blessed to have benefited from his life. And, though he departed through the glorious blue skies of the San Luis Valley, he left us far too soon. He lives within our hearts and we find comfort knowing that he is with God. Joe is survived by his wife, three sons, grandchildren, daughter-in-law (Heather Garcia of Alexandria, VA), sisters (Patricia Rosalie Herrera, Geraldine Garcia and Louise Ar-chuleta) his many nephews, nieces, in-laws, dear friends, former students and players. He was preceded in death by his father and mother, his beloved older sister Adeline Peak, older brother Fred Garcia, and younger brothers Leroy (Pancho) Garcia, the twins Albert and Meliton Archuleta, and Clarence Archuleta. The family would like to thank those at San Luis Valley Regional Medical Center who assisted in Joe’s emergency care, the friends who shared their condolences and the family whose love we so cherish. Due to COVID 19 restrictions, private military service and a celebration of life is being planned and will be held at a later date. Arrangements are in the care of Romero Funeral home of Alamosa. In memoriam donations may be made in Joe P. Garcia’s name to: Disabled American Veterans (dav.org) and Upward Bound (adams.edu/students/upward-bound).

The family of Joe P. Garcia created this Life Tributes page to make it easy to share your memories.

Send flowers to the Garcia family.