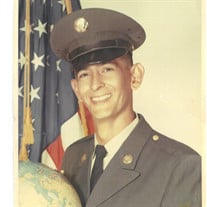 Lifetime Saguache resident Jimmie Paul Lovato, 76, went to his eternal rest on September 10, 2020 peacefully at his home under Hospice Care with his loving family by his side. Jimmie came into the world on January 1, 1944 in Saguache, Colorado the beloved son of Antonio Lovato and Virginia Lujan Lovato. Jimmie served and was a veteran of the United States Army during the Vietnam War. After he served his country and completed his duties in the service, Jimmie went on to work for General Motors where he retired from and then got on with the Saguache County Road and Bridge Department where he also retired from. He met his wife in 1984 and married her on November 8, 1997 and the two shared a long and loving union until his passing. Jimmie loved spending time with his family and going hunting with his brothers and family at Lovato Camp. He also enjoyed working with his son-in-law Eddie on the bread route, and with Tim Lovato at the Ranch, watching Western Movies, and spending time with his wife, children and grandchildren, Jimmie was an avid Packers fan and he will be dearly missed. He will live on through his wife Sandra Lovato of Saguache, CO; daughters Iris (Eddie) Garcia, Juanita Murphy both of Saguache, CO; sons Eric Lovato of Grand Junction, CO; Anthony Myers of Rifle, CO; Joseph Myers of Evergreen, CO; 18 grandchildren, 7 great-grandchildren, sisters Carla Mondragon, Cindy (Randy) Arredondo, sister-in-law Jan Lovato all of Saguache, CO; brothers Gary (Chiara) Lovato of Milford, PA; Steve Lovato of Grand Junction, CO; Albert (June) Lovato of Montrose, CO. He is also survived by numerous nieces, nephews, cousins and friends. Jimmie was preceded in death by his parents Antonio and Virginia Lovato, brothers Arnold Lovato, Glen Lovato, Ronnie Lovato and sister Barbara Vigil. A Funeral Service will be held on Wednesday, September 16, 2020 at 1:00 PM at the Saguache Baptist Church. Interment will follow at the Hillside Cemetery with full military honors. To leave online condolences please visit romerofuneralhomes.com. The arrangements have been entrusted to Romero Funeral Home of Monte Vista.

Lifetime Saguache resident Jimmie Paul Lovato, 76, went to his eternal rest on September 10, 2020 peacefully at his home under Hospice Care with his loving family by his side. Jimmie came into the world on January 1, 1944 in Saguache, Colorado... View Obituary & Service Information

The family of Jimmie Paul Lovato created this Life Tributes page to make it easy to share your memories.

Send flowers to the Lovato family.