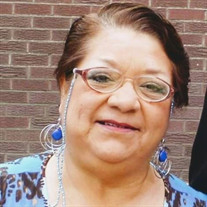 Alamosa resident Jacqueline Marie Flynn, 67, went to her eternal rest on May 8, 2020 at the University Hospital in Denver with her loving family by her side. Jaci was born on March 4, 1953 in Denver, Colorado, the daughter of Joe C. Trujillo and Esther Garcia. She was united in marriage to her husband Thomas Carl Flynn on August 10, 1992 and the two had a long and loving union until her passing. she was the past president of the V.F.W. women's auxiliary. Jaci was a loving and devoted wife, mother, grandmother, sister, aunt, cousin and friend who enjoyed going camping, fishing, crocheting, cooking, babysitting and bragging about her grandchildren. Her family was her greatest accomplishment and what she was most proud of. She will be dearly missed. She will live on through her husband Tom Flynn of Alamosa, CO; daughters Carol (Charles) Trujillo of Alamosa, CO; Marilyn (Josh) Moss of Albuquerque, NM; son Julio (Nadia) Villagomez of Alamosa, CO; her grandchildren Kathryn, Synthia, David, Victoria, Sarah, Jack, Mariah, Joseph, Lielani, Lionel, great-grandchildren Brysen, Kingsley, Ziniah, sisters Bernadette Trujillo and Josette (Joe) Romero both of Alamosa, CO; Gerri (Edward) Ortiz of Capulin, CO; brothers Charles (Carol) Trujillo, Andrew Trujillo, Tim Trujillo all of Alamosa, CO; Gabriel (Betty) Trujillo of Monte Vista, CO; Christopher (Lori) Trujillo of Reno, NV. she is also survived by numerous nieces, nephews cousins and friends. Jaci was preceded in death by her parents Joe and Esther Trujillo, paternal grandparents and her parent-in-laws Mabel and Paul Flynn and one brother Guy Trujillo. Cremation was chosen and a Memorial Service will be held at a later date. To leave online condolences please visit romerofuneralhomes.com. The care of arrangements have been entrusted to Romero Funeral Home of Alamosa.

Alamosa resident Jacqueline Marie Flynn, 67, went to her eternal rest on May 8, 2020 at the University Hospital in Denver with her loving family by her side. Jaci was born on March 4, 1953 in Denver, Colorado, the daughter of Joe C. Trujillo... View Obituary & Service Information

The family of Jacqueline Marie Flynn created this Life Tributes page to make it easy to share your memories.

Send flowers to the Flynn family.