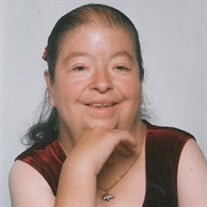 It is said Helen always had a book in one hand and a rosary in the other. A warming smile, reassuring like a mothers touch and so much sweetness to give, people nicknamed her "Sugar." Sometimes when nothing else could restore the youth and life into the lives of her friend and family, she would sit down beside their beds all day and night to help them leave the earth. Her service to the people was prayer, and her gift of life was the memory. In this ever changing world, Helen was the rare example of all that is true and honest, But on April 20, 2019 at the age of 57, it was Helen's turn to be with her loved ones in heaven. Helen was born on May 3, 1961 to Theodore Lee Lujan and Mary Josefina Martinez Lujan. Helen, Along with her siblings was raised in a loving Mexican and Catholic home. They were taught the importance of selflessness and were instilled an unshakeable faith in God. Helen grew up in Los Valdeses, 7 Mile Plaza, Rio Grande Colorado and she would dedicate a lifetime to her family and friends. Helen never believed in statuses or superficial things. Having been diagnosed a special needs child and survived open heart surgery at three months old, other people would attempt to dictate Helen's life expectancy and purpose. However, she went on to live an unconventional life, beating all expectations and accomplishing more than anyone imagined. Helen never believed she was more or less than anybody else, even after a group of schoolmates refused to sit with her in the cafeteria because they wouldn't sit next to a "retard." Having never heard that word before, and much less knew the meaning, she asked her father what that meant. She was reminded by her father to never think of herself differently, and from that day forward she practiced live and compassion. This is how she learned to truly love others despite of how unpleasant they could be. Helen also dedicated her life to giving. She helped educate her siblings just like her mother Mary, who had also helped raise her brothers and sister when she was young. Helen's mother would later have nine children of her own. Having had a mother who was an advocate of Chicanos and education and was the leading plaintiff in the Lujan case, she followed in her mother's footsteps. Helen's mother was an amazing woman who was also a foster parent and worked with the handicapped students. Helen had an incredible role model to look up to since her mother earned a double masters degree in language and education in only three years. Helen became the new teacher of the family despite her disability. She taught her sisters how to read, despite not knowing how herself and she shared her strength with her sisters who now delight in their own successful careers. Helen was the kind of person whose friendship was he extra sparkle of sweetness you need to make it through the toughest days. She was the person who kept you smiling, even when your last conversation with her happened many heartbeats ago. She was an artist, a traveler, a fan of Mexican music and a hard worker. Even in her final days she never missed work and never forgot to pray. She reminds us that change is inevitable and that's okay. Helen didn't wear the fanciest clothes, or go to the best universities. She was married and divorces, but her enduring wisdom changed many people's perception of life. When asked why she got a divorce, Helen simply replied "I just got tired of him.' Helen welcomed change and knew better than to reside in the past. She believed that there isn't enough time in the life to sit around doing nothing. She never bragged of her accomplishments because there is still so much left to do. Although she always prepared to welcome change, her photographic memory always stayed the same. To Helen, people were never forgotten. She remembered everything about everyone from birth dates to favorite colors. She only needed to hear it once for it to be etched into her heart. In this world, there is evidence of Helen's love for everyone. Like her favorite saint France of Assisi states, "Where there is hatred, she will sow love. where there is doubt she will sow faith. Where there is darkness she will shine the light, and it's in dying that she has been born into eternal life.” Helen is reunited with her mother and father as well as her brother Teddy David Lujan. Helen will be forever missed by her sisters Priscilla Lujan Falcon, Agnes Lovida Lujan, Julie Ann Lujan, Cynthia Jo Lujan Gasca, Janice Lujan Sanchez, Gaye Elizabeth Lujan, and Alicia Kathleen Lujan Allen. Viewing and visitation will be held on Thursday, from 1-5 PM at the Romero Funeral Chapel in Alamosa. A Vigil Service with Recitation of the Rosary will be held on Thursday, April 25, 2019 at 7:00 PM at the Holy Name of Mary Catholic Church in Del Norte. A Mass of the Resurrection will be held on Friday, April 26, 2019 at 10:00 AM also at Holy Name of Mary Catholic Church. Interment will follow at the Seven Mile Plaza Cemetery.

It is said Helen always had a book in one hand and a rosary in the other. A warming smile, reassuring like a mothers touch and so much sweetness to give, people nicknamed her "Sugar." Sometimes when nothing else could restore the youth and... View Obituary & Service Information

The family of Helen Louise Lujan created this Life Tributes page to make it easy to share your memories.

It is said Helen always had a book in one hand and a rosary in...

Send flowers to the Lujan family.