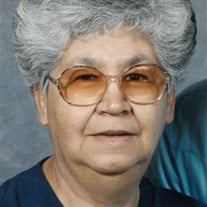 Blanca resident Geneva Martha John, 80, passed away with her loving family by her side April 18, 2019 at Evergreen Nursing Home in Alamosa, CO. Geneva was born on July 27, 1938 in Manassa, CO, the daughter of Augustine Ruybal and Ernesta Duran... View Obituary & Service Information

The family of Geneva Martha John created this Life Tributes page to make it easy to share your memories.

Blanca resident Geneva Martha John, 80, passed away with her...

Send flowers to the John family.