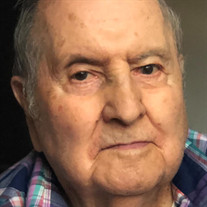 Ft. Lupton former San Acacio resident Francisco B. Valdez, 97, was called home to be with the Lord on April 8, 2022. Francisco was welcomed into the world on June 4, 1924 in San Luis, Colorado, the son of Dario Valdez and Margaret Valdez. After he graduated high school, Frank went to enlist and serve in the United States Army. He served during world War II. After he completed his duties and time in the service he went on to do ranch work. He loved being outdoors, gardening and playing cards. He was a proud member of the American Legion. Frank was a dedicated and exceptional husband, father, grandfather, great-grandfather, brother, uncle, cousin and friend who cherished every moment he was le to spend with family and friends. He will be dearly missed. He will live on through his wife Victoria Valdez of Ft. Lupton, CO; daughters Frances (John) Santisteven of San Acacio, CO; Dorothy (Jim) Mathis of Pueblo, CO; Evelyn (Robert) Martinez of Aurora, CO; Sarah Valdez of Alamosa, CO; Juanita Valdez of San Acacio, CO; step-daughters Velma (Gerardo) Moreno of Ft. Lupton, CO; Sandra (Wayne) Valdez-Armstrong, Celina (Rodney) Gallegos both of Thornton, CO; sons Carlos (Ruby) Valdez of Arvada, CO; Robert Valdez of San Acacio, CO; step-son Andrew Valdez of Wheat ridge, CO; sister Julia Albert of San Luis, CO; brother Alfonso Valdez of Denver, CO. He is also survived by many other extended family members and friends. Frank was preceded in death by his parents Dario and Margaret Valdez, his first wife Mary A. Valdez, daughters Loretta Valdez, Lillian Valdez and Vivian Valdez. Viewing and visitation will be held on Tuesday, April 19, 2022 from 1-4 PM at the Romero Funeral Chapel in San Luis. Vigil Service will be held on Wednesday, April 20, 2022 at 10:30 AM at Sangre De Cristo Catholic Church. Mass of the Resurrection will follow at 11:00 AM. Interment will follow at the San Pedro Cemetery with full military honors. To leave online condolences please visit romerofuneralhomes.com. The care of arrangements has been entrusted to Romero Funeral Home of San Luis.

Ft. Lupton former San Acacio resident Francisco B. Valdez, 97, was called home to be with the Lord on April 8, 2022. Francisco was welcomed into the world on June 4, 1924 in San Luis, Colorado, the son of Dario Valdez and Margaret Valdez. After... View Obituary & Service Information

The family of Francisco B. Valdez created this Life Tributes page to make it easy to share your memories.