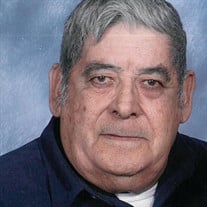 Monte Vista resident Francisco "Frank" Emilio Cordova, 84, passed away peacefully August 27, 2021 at the Rio Grande Hospital in Del Norte with his loving family by his side. Frank was born on June 10, 1937 in San Acacio, Colorado, the beloved son of Delfino Cordova and Eliria Espinoza Cordova. Frank enlisted, served and was a veteran in the United States Air Force during the Korean Conflict. Once he was honorably discharged from the service he went to work in the mines for many years. Frank enjoyed doing yard work, woodwork and was an avid sports fan. He loved spending time with his family and will be dearly missed. Survivors include his daughters Shirley Martinez of Monte Vista, CO; Renee (Nestor) Guerrero of Las Vegas, NV; son Gary (Doreen) Cordova of Pueblo, CO; grandchildren Daniel Medina, Vicki Medina, Roberto Guerrero, Anthony Guerrero, great-grandchildren Sonya Gonzales, Juanito Gonzales, Christopher Gonzales, Leonidas Guerrero, sister Rosanna Garcia of Alamosa, CO; brothers Delfino Cordova of Alamosa, CO. Frank was preceded in death by his parents Delfino and Eliria Cordova and his beloved wife Ida Cordova. Viewing and visitation will be held on Tuesday, August 31, 2021 from 1-4 at the Romero Funeral Chapel in Alamosa. A Vigil service with Recitation of the Rosary will be held on Wednesday, September 1, 2021 at 9:30 AM at Sacred Heart Catholic Church in Alamosa. A Mass of the Resurrection will follow at 10:00 AM also at Sacred Heart Church. Interment will be at the Alamosa Cemetery with full military honors. To leave online condolences please visit romerofuneralhomes.com. The arrangements have been place in care of Romero Funeral Home of Alamosa.

Monte Vista resident Francisco "Frank" Emilio Cordova, 84, passed away peacefully August 27, 2021 at the Rio Grande Hospital in Del Norte with his loving family by his side. Frank was born on June 10, 1937 in San Acacio, Colorado, the beloved... View Obituary & Service Information

The family of Francisco "Frank" Emilio Cordova created this Life Tributes page to make it easy to share your memories.

Send flowers to the Cordova family.