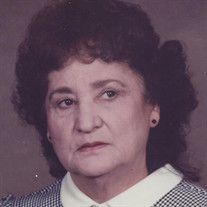 Our dearly beloved Frances Mary Romero, 92, gained her angel wings and was reunited with the love of her life and daughter on April 21, 2022. She made her grand entrance into the world on September 25, 1929 in San Luis, Colorado. She was the daughter of Adrian Valdez and Manuelita Sanchez Valdez. Frances was united in marriage to Delbert "Sonny" Romero on January 21, 1951. They shared 54 amazing, happy and loving years together. From their union they had four children. Two of whom went to Mortuary School in San Francisco and returned to start Romero Funeral Homes Inc., one served in the Army during Vietnam and later became a master embalmer and helped his brothers at the funeral home and their only daughter became a beautician. She owned and operated All Hair Care until her passing. Frances devoted her life caring for her family and serving the Lord. She was devoted to her faith and her love for God. She not only raised four wonderful children of her own but also played an immeasurable part in helping raise many of her grandchildren. Frances was known for her kind, compassionate and loving nature. She was also an amazing cook. Her spaghetti, tortillas, tamales and chili were treasured by her family. Frances was one of the most dedicated and exceptional wife, mother, grandmother, great , great-great-grandmother and friend that we could ask for. She was selfless with her time and made sure to always be the first to help anyone in need. She would volunteer at the River of Life Church as well as the Templo Cristiano in Capulin alongside the Late Reverend Gil Lucero and his wife Della. Frances made many friends in the community through her church activities. Frances was a prayer warrior and her prayers are what kept her family safe and on the right track throughout the years. She is irreplaceable and left big shoes for her family to fill, but through the grace of God we will all do our best to make our Sweet Frances proud. She was so dearly loved and will be truly missed. Rest now faithful servant, your work is done. She will live on through her sons Larry (Debbie) Romero, Leonard (Kathy) Romero, Delbert Romero Jr. (Benita), grandchildren DeeAnn (Louis) Gomez, Kristie (Robert) Bonino, Trishia Romero, Vanessa (Shawn) Archuleta, Brandon Chavez, Angelo Romero, Andres (Johnette) Romero, Allen (Mariquita) Romero, Bob Romero (Sheila Sandoval), Danny (Andrea) Trevizo, Nathan Romero, Alex Romero, William (Zulema) Stone, Michelle (Bobby) Garza, Richele Sergi (Daniel Owsley), Stephanie (Suzi) Heston, Kami (John) Haskell, numerous great and great-great-grandchildren. She is also survived by numerous other extended family members and friends. Frances was preceded in death by her parents, husband Delbert "Sonny" Romero Sr., daughter Veronica Nola Romero, maternal and paternal grandparents, as well as many siblings, aunts and uncles. Viewing and visitation will be held on Tuesday, April 26, 2022 from 12-4 PM at the Romero Funeral Chapel in Alamosa. A Funeral Service will be held on Wednesday, April 27, 2022 at 11:00 AM at the River of Life Assembly of God Church in Alamosa. Interment will follow at the Alamosa Cemetery. To leave online condolences please visit romerofuneralhomes.com. The arrangements have been placed in care of Romero Funeral Home of Alamosa.

Our dearly beloved Frances Mary Romero, 92, gained her angel wings and was reunited with the love of her life and daughter on April 21, 2022. She made her grand entrance into the world on September 25, 1929 in San Luis, Colorado. She was the... View Obituary & Service Information

The family of Frances Mary Romero created this Life Tributes page to make it easy to share your memories.