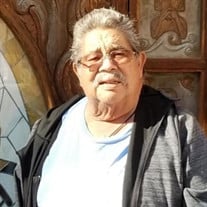 Los Fuertes resident Eusebio Jimmie Medina, “Grampy” as he was affectionately called by his grandchildren, passed away on Saturday November 27, 2021 after a courageous battle with diabetes. Eusebio was born on May 29, 1950 to Pedro and Clorinda Medina in San Pablo, CO. He was united in marriage to Olympia Arellano on June 19, 1971. They had just celebrated their 50th anniversary. Eusebio owned and operated Medina Sheet Metal, and helped many people throughout the San Luis Valley, and southern Colorado. Eusebio never considered anyone a stranger and befriended each person he met. He loved going on bus tours, going to casinos, going for wood, going fishing, watching the daily mass and the rosary on tv every evening, although, his favorite activity was sitting in his garage listening to oldies. Eusebio is survived by his wife Olympia, his daughters Tammy (Chris) Rodriguez, and Tara (Ricardo) Medina, both of San Luis. One son, Terry Medina (Melanie Vasquez) of Colorado Springs. One brother Pedro Jr (June) Medina of Denver. Three sisters Olivia Medina of San Francisco, CO, Rose DeHerrera of Denver, and Gloria Espinoza of Alamosa. He has five grandchildren, James Rodriguez of Alamosa, Carlitos Medina of Colorado Springs, and Anai, Sezzerae, and Carla Medina all of San Luis. He had four honorary grandchildren that he loved as his own, Sammantha, and Emily Vialpando, and Isaac and Mikayla Vasquez. He also has many in-laws, nephews and nieces. He was proceeded in death by both of his parents, and one brother, Leroy Medina. Rosary will be Saturday December 4, 2021 at 10:00 AM at Sangre De Cristo Catholic Church in San Luis, CO, Funeral will be at 10:30, burial to follow at the San Isidro Cemetery. Due to COVID-19 the family is requesting that everyone attending the mass to wear a mask. To leave the family online condolences please visit romerofuneralhomes.com. The care of arrangements has been entrusted to Romero Funeral Home of San Luis.

Los Fuertes resident Eusebio Jimmie Medina, &#8220;Grampy&#8221; as he was affectionately called by his grandchildren, passed away on Saturday November 27, 2021 after a courageous battle with diabetes. Eusebio was born on May 29, 1950 to Pedro... View Obituary & Service Information

The family of Eusebio Jimmie Medina created this Life Tributes page to make it easy to share your memories.

Los Fuertes resident Eusebio Jimmie Medina, “Grampy” as he was...