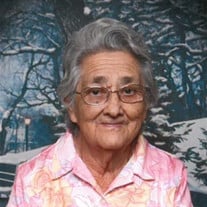 Chama resident Esperanza "Hope" Manzanares, 89, passed away May 21, 2019 peacefully at her home under Hospice care with her loving family by her side. Hope was born on February 15, 1930 in San Luis, Colorado, the daughter of Cornelio Olivas and Florinda Vigil Olivas. She was united in marriage to Antonio Manzanares and the two shared a loving and happy union until his passing. She remarried Selustiano Martinez and he was also an exceptional husband who loved Hope dearly. Hope was an exceptional and loving mother, grandmother, great-grandmother, sister, aunt, cousin and friend who enjoyed sewing, embroidering, gardening, and especially the time she spent with her family and friends. Survivors include her daughters Katherine Manzanares of San Luis, CO; Dinah (Ray) Jacquez of Alamosa, CO; Toni Archuleta (John Serna) of Chama, CO; Michelle Sandoval of Antonito, CO; sons Chuck (Janet) Manzanares, Vicente Rios both of Chama, CO; 9 grandchildren, 26 great-grandchildren, 4 great-great-grandchildren; brother Ernest Olivas of San Luis, CO. She is also survived by many nieces, nephews, cousins and friends. Hope was preceded in death by her parents Cornelio and Florinda Olivas, first husband Antonio Manzanares, second husband Selustiano Martinez, daughter Judy (Steve) Cullen, one great-grandchild Harley Ramos, brother Orlando Olivas, sister Thelma (Richard) Oakman, sons-in-law Arthur DeHerrera. A Vigil Service with Recitation of the Rosary will be held on Sunday, May 26, 2019 at 7:00 PM at the Immaculate Conception Catholic Church in Chama. A Mass of the Resurrection will be held on Monday, May 27, 2019 at 11:00 AM also at the Immaculate Conception Church. Interment will follow at the Chama Cemetery.

Chama resident Esperanza "Hope" Manzanares, 89, passed away May 21, 2019 peacefully at her home under Hospice care with her loving family by her side. Hope was born on February 15, 1930 in San Luis, Colorado, the daughter of Cornelio Olivas... View Obituary & Service Information

The family of Esperanza "Hope" Manzanares created this Life Tributes page to make it easy to share your memories.

Send flowers to the Manzanares family.