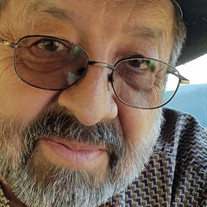 Our beloved Ernesto "Ernie" Eliseo Mondragon or as many knew him by Coach Mondragon, took his eternal rest on March 16, 2022. He passed away peacefully at his home surrounded by his loving family. Ernie made his entrance into the world on October 30, 1951 in Alamosa, Colorado, the eldest child of Alfredo and Asuncionita (DeHerrera) Mondragon. Coach Mondragon was an educator in every form of the word, He was always one to lend a helping hand when needed, always had an ear to listen if you needed someone to talk to and always had his words of wisdom to pass down. Those of us who were lucky enough to have him as a teacher will always remember gym class with him, as those of us who had no upper body strength would dangle on his famous climbing rope we would hear him and his words of encouragement to keep going and not give up until you reached the top. We will also never forget the scooter races he liked to have his students participate in and how we would run over all our fingers and it did not ever phase us as we were focused on winning until after class when we struggled to do our school work for our other classes. He was a great friend and an exceptional mentor. When he had free time, Coach enjoyed being in the mountains with his family, going hunting and fishing and listening to Willie Nelson. He also enjoyed traveling. He will be dearly missed! Survivors include his wife Jaime "Charli" Mondragon of Alamosa, CO; sons Clint (Kaylee) Mondragon of Monte Vista, CO; Edwin (Dani) Mondragon of Alamosa, CO; Corey (Rachael) Mays of Denver, CO; daughter Lauren Cook of Alamosa, CO; 13 grandchildren, sisters Dolores Mondragon (Dale Martinez), Martha Mondragon (Leonard Quintana) both of Antonito, CO; Gloria (Andy) Medina of Alamosa, CO; Brother David (Angela) Mondragon of Antonito, CO. He is also survived by many other extended family members and friends. Ernie was preceded in death by his parents, his first wife Linda Mondragon and one infant brother Charles Mondragon Cremation was chosen and a Memorial Mass will be held on Thursday, March 24, 2022 at 11:00 AM at Our Lady of Guadalupe Catholic Church in Conejos. Inurnment will be held at a later date. In lieu of flowers donations can be made to the American Heart Association at 1365 Garden of the Gods Road, Suite #100, Colorado springs, CO. 80907, Diabetes Research Institute 200 S. Park Road Suite #100, Hollywood, FL. 33021, as well as the American Cancer Society at 1600 E. Harvard Ave. Suite #400, Denver, Colorado 80231. To leave online condolence please visit romerofuneralhomes.com. Arrangements have been placed in care of Romero Funeral Home of Alamosa.

Our beloved Ernesto "Ernie" Eliseo Mondragon or as many knew him by Coach Mondragon, took his eternal rest on March 16, 2022. He passed away peacefully at his home surrounded by his loving family. Ernie made his entrance into the world on October... View Obituary & Service Information

The family of Ernesto "Ernie" Eliseo Mondragon created this Life Tributes page to make it easy to share your memories.

Our beloved Ernesto &quot;Ernie&quot; Eliseo Mondragon or as many knew...

Send flowers to the Mondragon family.