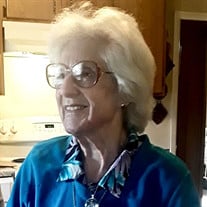 Ernestine Mary (Rodriguez) Martinez began her journey to be with the Lord and her beloved family on April 21, 2022. She was born on June 22, 1929 in Monte Vista, Colorado, to Ismael and Brenilda (Vigil) Rodriguez. Ernestine married Pedro "Pete" Martinez September 16, 1946 in Antonito, Colorado. They shared 70 amazing years together before Pete's passing in 2017. Ernestine was primarily a homemaker but she was employed through La Jara City drug store, Assistant Director of La Jara Senior Citizen Center and Public Service Company of Colorado in La Jara. Ernie as she was affectionately known, loved to cook, sew, quilt, embroidery, and loved to spend hours visiting nursing homes to visit with shut ins and homebound residents. Ernie's kitchen was famous to all her kid's friends as well as to so many others who sat at her table. Her chili beans and tortillas were treasured. She never knew a stranger, only many hungry friends. After her husband's death, the telephone and Alexa became her best friends. Dealing with diabetes and loss of her eyesight as well as partial loss of hearing, she preferred to be at home where she could continue her lifestyle. Ernestine was a true prayer warrior praying the rosary three to four times a day, along with watching the Spanish mass and the regular mass on EWTN. She also enjoyed betting on Denver Bronco and Colorado Rockies games with her son-in-law Jeff and any of her kids who would also like to partake. She usually won. Ernie was a member of the American Ladies Auxiliary, D.A.V., Daughters of Mary, Our Lady of the Valley Catholic Church and the Benedictine Oblates of Cañon City. Ernestine showed her compassion, love, empathy and humanity to all she touched. Her faith to God, family, friends and prayer set an example to all who knew her. Her spirit lives on in all who came in contact with her. Ernestine was preceded in death by her husband Pete, parents Ismael and Brenilda Rodriguez, in-laws Felipe and Maclovia Martinez, brothers Ernest, Mel, Alonzo and Benito Rodriguez, three infant brothers, sister Lydia Trujillo Rodriguez, grandsons Wesley Doyle, Derek Martinez, great-grandson Devon Doyle, Martinez family members Raymond, Billie, Mary, Bertha and Charlie, as well as several nieces and nephews. She will live on through her children Leonard Martinez, Renee (Brad)Wilcox, Stanley Martinez, Leland (Karol) Martinez, Raylene (Jeff) Romero, brother Amos Rodriguez, sister Joyce Mestas, sisters-in-laws Millie Rodriguez, Erma Gallegos, Thelma Rodriguez, Lela Ortiz, several grandchildren, great-grandchildren, great-great-grandchildren, nieces, nephews, cousins and extended family members. Vigil Service will be held on Monday, April 25, 2022 at 10:00 AM at Our Lady of the Valley Catholic Church in La Jara. A Mass of the resurrection will follow at 11:00. Interment will at the La Jara Cemetery. To leave online condolences please visit romerofuneralhomes.com. The care of arrangements has been entrusted to Romero Funeral Home of Alamosa.

Ernestine Mary (Rodriguez) Martinez began her journey to be with the Lord and her beloved family on April 21, 2022. She was born on June 22, 1929 in Monte Vista, Colorado, to Ismael and Brenilda (Vigil) Rodriguez. Ernestine married Pedro "Pete"... View Obituary & Service Information

The family of Ernestine Mary Martinez created this Life Tributes page to make it easy to share your memories.

Ernestine Mary (Rodriguez) Martinez began her journey to be with...

Send flowers to the Martinez family.