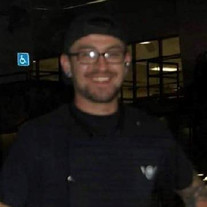 Aurora former Alamosa resident Eric Von DeHerrera, 27, passed away August 4, 2019. Eric was welcomed into the world on July 15, 1992 in Alamosa, Colorado, the beloved son of Mark DeHerrera and Rita Vigil DeHerrera. After graduating high school, he worked various jobs throughout the years. Eric was a loving son, grandson, brother, uncle, cousin and friend who liked barbequing, going hiking, snowboarding and above all he loved the time he was able to spend with his family and friends. Eric's time with us was not long enough, but while he was here he left memories we will all cherish for a lifetime and he will be dearly missed. Survivors include his mother Rita Vigil (Orlando) of Taos, NM; maternal and paternal grandmothers Loyola DeHerrera of Alamosa, CO; Tillie Vigil of Alamosa, CO; brother Frederico DeHerrera (Gen) of Alamosa, CO; sister Vanessa DeHerrera of Pueblo, CO; niece Jenevieve DeHerrera of Alamosa, CO; aunts and uncles Jackie Vigil, Dolly (Mike) Maestas, Albert (Sharon) DeHerrera, Cory (Wendy) DeHerrera all of Alamosa, CO. He is also survived by numerous cousins and friends. Eric was preceded in death by his father Mark DeHerrera, paternal grandfather Fred DeHerrera, maternal grandfather Roger Vigil, aunt Gayle Amaya and one cousin Carlos Jaramillo. Viewing and visitation will be held on Thursday from 1-5 PM at the Romero Funeral Chapel in Alamosa. A Mass of the Resurrection will be held on Friday, August 9, 2019 at 10:00 AM also at Sacred Heart Catholic Church. Interment will follow at the Alamosa Cemetery.

The family of Eric Von DeHerrera created this Life Tributes page to make it easy to share your memories.

Send flowers to the DeHerrera family.