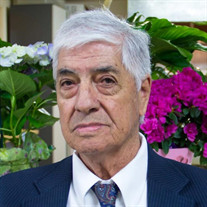 Epifanio “Epi” Jaramillo was a lifelong resident of Fort Garland; armed forces veteran; teacher “Mr. Jaramillo”; husband, father, coach, community volunteer and twice elected Costilla County Commissioner. Epi passed away at the age of 93. He was born in Fort Garland to Rudolfo and Terecita Jaramillo and had six siblings; all of whom predeceased him. Epi lead a full and remarkable life. He was widely known as a teacher, jokester, story-teller and terrific classic and jitterbug dancer and he loved hunting and fishing and getting together with his many life-long friends. He is remembered as a phenomenal left-handed baseball pitcher as a student in Fort Garland who then went on to be a 4-year baseball starter and graduate of Adams State College {now University). After college, Epi joined the U.S. Army and served in World War II. He was later reactivated for the Korean Conflict. When he returned home, he was hired by the Fort Garland School District and later, the Blanca / Fort Garland Consolidated School District. He taught and coached there for many years. One year, as the Junior Varsity coach, he took his team to the State Playoffs where they won the State Championship. He later taught at the Centennial School District in San Luis from which he retired in the mid 1980s. Epi’s wife, Ruth Lucero Jaramillo passed away in 2013. His Son, Epi “Sonny” Jaramillo, Jr., passed away just over a month ago. He is survived by son, Mark (Irene) and their children, Mark, JJ, Joell (Jasmine) Valles and great grandchildren, Brandon, Valerie, Nathan and Andrea as well as Sonny’s son, Nathanial DiCamillo (Bailey). A rosary will be said on Friday, July 30 at 7:00 PM at the Romero Funeral Home in Alamosa. Graveside services with military honors will occur on Saturday, July 31 at 10:00 AM at the Fort Garland Cemetery. To leave online condolences please visit romerofuneralhomes.com. The care of arrangements have been entrusted to Romero Funeral Home of San Luis.

The family of Epi Evan Jaramillo created this Life Tributes page to make it easy to share your memories.

Epifanio “Epi” Jaramillo was a lifelong resident of Fort Garland;...

Send flowers to the Jaramillo family.