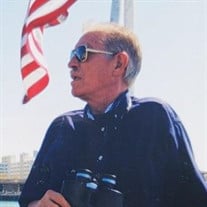 It is with great sorrow to announce that longtime valley resident Edward “Eddie” Vito Sandoval, Age 84, passed away peacefully at Penrose Hospital in Colorado Springs on March 11th, 2022. Born on October 8, 1937 in Alamosa, Co., beloved son of Juan & Eliza Lobato, Sandoval. Eddie graduated from Alamosa High School, class of 1957. Eddie participated in Football, Track, Choir, A Club, & Spanish Club. Eddie attended Adams State College from 1957-1959 and was a member of both Band and Choir. In 1959, he toured 5 States with ASC Choir and went to The Rose Bowl. Eddie served in the Army National Guard from 1957-1963, then in the reserves 1967-1968. He married Rosemary De Herrera in 1960 and they had 5 children, 4 sons and 1 daughter. Eddie was known in the community as a hard worker. He started his employment at a young age with The Rocky Mountain News, followed by Sales for Jewel Tea Company. He then worked for Alamosa Community Hospital as an Orderly. He was then employed by Cal Gas for many years delivering propane. He also owned and operated Mac’s Pool Hall. His customers loved coming in for their daily fix of a great hot dog and his famous hot sauce. Eddie also leased The Smoke House and because of his love for dancing & music, he would host weekly Disco nights. Eddie returned to Cal Gas, where he made many friends across the Valley. After retirement, Eddie did not like to be idle, so he found employment at Wal- Mart, where he worked for many years in maintenance and retired in Jan. 2019. When he was younger, he sponsored a Woman’s Softball League. He also enjoyed bowling, cross word puzzles, watching old Westerns and his favorite tv show Blue Bloods. He was a loyal and active member of The American Legion, Post 113. He served as Commander of The American Legion, he was also active in the VFW. He served countless Honor Guards, rendering honors for many fallen heroes. Eddie served as a Trustee for the American Legion as well as many leadership roles. He was active in many MIA/POW causes and was proud to march in many parades and funerals. Eddie was always one of the people volunteering his time for others. When he was getting older and the ceremonial rifle (12 pounds) was getting heavier for him, he didn’t complain, he still showed up for others! Until recently, he was also an Usher for Sacred Heart Parish. After retirement, he looked forward to his annual trips to AZ. To visit with his children, grandchildren and brother. Eddie is survived by his wife Nancy Martinez, Alamosa, Co., his daughter Kimberly Sandoval, StepSon Paul Lingaas, StepDaughter Lisa Lingaas (Eric) Tolbert and 6 grandchildren. He will forever be cherished in the lives of his his children Steven (Annie) Sandoval of Phoenix, AZ, Rick (Rosalie) Sandoval of Surprise, AZ, Derek (Melissa) Sandoval of Phx., AZ, Brad Sandoval of Thornton, CO., Traci (William) Maestas of Gilbert, AZ 16 grandchildren, & 6 great grandchildren. Eddie is preceded in death by his parents, Juan & Eliza Sandoval, brothers Henry Sandoval, Juanito Sandoval, Alphonso (Sandy) Sandoval, Ersenia Romero Sandoval, Belinda Sandoval, Juanita Sandoval, & Anthony (Tony) Sandoval. He is survived by his brothers Robert Sandoval and Joseph E. Sandoval The Rosary will be held on Friday, March 18, 2022 at 11:30 AM at Sacred Heart Catholic Church in Alamosa, Co. Mass to follow at 12:00. Burial with full military honors will be at the Alamosa Cemetery. To leave online condolences please visit romerofuneralhomes.com. The arrangements have bene placed in care of Romero Funeral Home of Alamosa.

The family of Edward "Eddie" Sandoval created this Life Tributes page to make it easy to share your memories.

It is with great sorrow to announce that longtime valley resident...

Send flowers to the Sandoval family.