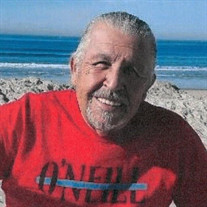 Longtime Capulin resident Edward "Ed" Quintana waved his final good bye on October 14, 2018. Ed was welcomed into the world on July 4, 1946 in Alamosa to Manuel Quintana and Louise Torres Quintana and he always teased that everyone celebrated his July 4 birthday. Ed lived his first seven years in Capulin before the family moved to North Denver. He served four years in the Navy, and because of the influence of his friend Al Valdez of Capulin he became interested in police work and started his police career with the LAPD. He moved back to Denver where he joined the Denver Police as a motorcycle cop. Among his many enjoyable experiences, he recounted the times he spent talking to Jay Leno before he was a well-known comedian and attending Elvis concerts as a police guard. He and his friend Ralph Gonzales spent six months working in Monte Vista in the mid 70’s by helping the Monte Vista police department get crime and other issues under control. He never forgot his love for the San Luis Valley and on a trip through Alamosa he saw a restaurant for sale. In his words, " I made a crazy offer". He got a call a few days later that he just bought himself a restaurant. Ed took a leave of absence from Denver PD, worked a couple of weeks in a friend’s restaurant in Denver, moved to Alamosa and opened up the Ace Inn. “ Ace is the Place“ as it was known by many was very successful. He worked very hard to maintain the restaurants excellence for the next 18 years. Often as we met people in Alamosa, not only was he recognized, but was told how they missed his Ace Inn food, especially Sopapilla Sundaes. Ed loved challenges and obviously wasn’t busy enough with the ACE INN, so opened up an auto dealership, a carpet shop and became successful in real estate. After selling the Ace Inn, he continued with his other endeavors for several more years. . He and his brother Robert worked at farming in Capulin. Spending his summer days on the tractor gave him great enjoyment and wintering in Mesa, Arizona and in Rocky Point, Mexico with his parents were other highlights. Ed had an outgoing personality, a great sense of humor, clever wit and a winning smile. He never met a stranger and kept in contact with many of his police friends. He is survived by the love of his life Maryann Pena whom he married in 2014, his daughter Denise Quintana and granddaughter Brittni Roybal and Shirley and Kristy Delgado, Denise’s mom and sister. His extended family who will miss him dearly are his two brothers-in- law, Andrew and Richard(Susan) and his sisters-in-law Nina, Valentina ,Ruth, Veronica, Vivian(Manuel Montoya),and Abbey along with the nieces and nephews he gained when he married Maryann. His very special nephew, Tommy Lee Martinez gave him much joy with his visits. His special friends Waldo Torres and Nick Hobbs were more than friends, they were his family. Bufford and Janet Blaney, other very special friends, blessed him with their friendship and prayers. Preceding him in death were parents Manuel and Louise Torres Quintana, brothers Robert and Arnold Quintana and nephew Arnold (Jinx) Quintana. Ed loved to gamble; you’d often find him feeding the slots in New Mexico or Black Hawk, and any other Casino between here and San Diego, he didn’t miss a one. He loved fishing, hunting, keeping up his Capulin yard and family gatherings. Cremation was chosen and a Memorial Service will be held on Thursday, October 18, 2018 at the River of Life Assembly of God Church in Alamosa. Inurnment will be held at a later date.

Longtime Capulin resident Edward "Ed" Quintana waved his final good bye on October 14, 2018. Ed was welcomed into the world on July 4, 1946 in Alamosa to Manuel Quintana and Louise Torres Quintana and he always teased that everyone celebrated... View Obituary & Service Information

The family of Edward "Ed" Quintana created this Life Tributes page to make it easy to share your memories.

Send flowers to the Quintana family.