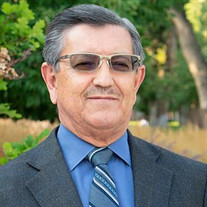 Dennis Jose Ramon Lopez was born on May 22, 1950 in Capulin, CO and was guided home by the angels on February 25th, 2022 at the age of 71 in Alamosa, CO. He was an avid reader and historian. He rooted for and supported the Broncos, Nuggets, Avalanche and several college level sports teams. He enjoyed his time in the mountains, especially if there was historical significance to the sites he visited. He enjoyed taking photos of the natural beauty around him. Dennis graduated from Adams State College with B.A’s in Spanish and French, received an M.A. in Secondary Education with minors in Chicano Studies and Psychology as well as an EDL from the University of Denver. He began a teaching career at Alamosa High School where he taught Chicano Studies, Spanish and French. He also sponsored many clubs and student programs. To support student athletics, he was an assistant baseball coach, Athletic Director, and announcer for the AHS wrestling program. He became the Associate Principal of AHS in 1993, principal of the Open High School and principal of AHS from 1998 through 2002. In his professional capacity as an educator, he was a member of the Alamosa Education Association and National Education Association. Dennis was one of the original members of Adobe de Oro Concilio de Artes that was established in 1987 with the purpose to present and preserve Indio-Hispanic arts in the San Luis Valley. As one of the founding members of the Sangre de Cristo National Heritage Area he was able to leverage its platform to educate and bring to light the history of the Valley and its people. He was an active member of the Sacred Heart Catholic Church where he served as a lector, Eucharistic minister, and took communion to the homebound. The San Luis Valley lost a storyteller and treasure in Dennis Lopez. He will live on through his loving wife Sally, sons Jose, Juan-Carlos and Ricardo Lopez of Alamosa, CO; brothers Fred (Linda) Lopez of Denver, CO; Jimmy Lopez of Capulin, CO. He joins his parents, Corina and Alfredo Lopez, in death. Viewing and visitation will be held on Thursday, March 3, 2022 from 1-4 PM at the Romero Funeral Chapel in Alamosa. Vigil service with recitation of the Rosary will be held on Friday, March 4, 2022 at 10:30 AM at Sacred Heart Catholic Church in Alamosa. Mass of the Resurrection to follow at 11:00 AM. Interment will be held at the Alamosa Cemetery. Masks will be required at the service and due to Covid there will not be a reception. Those who cannot attend the service may stream it live at www.sacredheartalamosa.org

Dennis Jose Ramon Lopez was born on May 22, 1950 in Capulin, CO and was guided home by the angels on February 25th, 2022 at the age of 71 in Alamosa, CO. He was an avid reader and historian. He rooted for and supported the Broncos, Nuggets,... View Obituary & Service Information

The family of Dennis Ramon Lopez created this Life Tributes page to make it easy to share your memories.

Send flowers to the Lopez family.