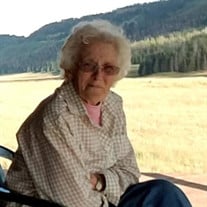 Deaon Gilleland Jarvies was born September 24, 1925 in Manassa, Colorado. She died on November 13, 2021 at the age of 96 in Gilbert, Arizona. Deaon was the second of two children born to Cornelius (Con) and Dora Mortenson Gilleland. Her older brother was Cletus. She was preceded in death by her parents, her brother Cletus and in-laws Barbara Mortenson Gilleland, John LaMonte Jarvies and Alice Rae Nelson Jarvies, Norman Joseph Jarvies and Dora Irene King Jarvies as well as her son Bruce, daughter Julie Anne and grandson Donald Jay Jarvies. Deaon is survived by her six remaining children and their spouses, Madelyn (Mark) Thomas-South Jordan, Utah; Linda (Cecil) Ash-St. George, Utah; Gregory (Kellie)-South Jordan, Utah; Bradley-Gilbert, Arizona; Allison (Chris) Peterson-Mill Creek, Utah and Kelly (Leslie)-Albuquerque, New Mexico, daughter-in-law Ann Mortenson Jarvies Hartman of Alamosa, Colorado and sister-in-law Elsie Jarvies of Albuquerque, New Mexico; 36 grandchildren, 92 great grandchildren and 18 great, great grandchildren. Deaon grew up in a loving home and was a happy-go-lucky child. She was smart, took well to school and was able to skip a grade in school. She learned music by singing in church and school choirs. She regretted having only had one lesson on the piano, but later played the saxophone in high school band. Deaon had a beautiful soprano voice and sang in a female quintuplet in High School called the Stardusters singing four-part harmonies. They were popular entertainment in theaters, at receptions, at the Rotary Clubs and at churches throughout the San Luis Valley. The other girls in the group were June Brady (Hunter), Carol Haynie (Tait), Hazel Thomas (Haynie) and Bethea Weimer (Gylling). After a year of Navy war duty, her high school sweetheart Donald Jackson Jarvies came home on leave and married her in Taos, New Mexico on September 11, 1943. They were sealed for eternity in the Salt Lake Temple five days later on September 16th. Following his return from World War II in 1945 Donald and Deaon started their family. Together they made their contribution to the “Baby Boom” with 4 boys and 4 girls: Madelyn was born in 1946: Bruce G, 1948; Julie Anne, 1950; Linda, 1952; Gregory G, 1954; Bradley G, 1955; Allison, 1960 and Kelly G, 1962. In order to make a living, they worked in the grocery business (Jarvies Grocery), the Conejos County Assessor’s Office, the theatre business (Pine Theater), hardware business (Reed’s Romeo Store) and finally settled in the gas station business (Donald’s Service) in Manassa which was the means of support for the Jarvies family until Donald retired in the early 1980’s. In addition to her wife and mother duties in the home, Deaon involved herself doing books in the family business. Deaon was a remarkable homemaker, seamstress and cook. She was a faithful wife and mother. Faithful because she loved and was faithful to her husband and children and also because she was full of faith. Prayer, fasting and service to others were an important part of her life. She was an active member of The Church of Jesus Christ of Latter-day Saints and served in many church callings including being an ordinance worker in the Denver Temple. With Donald, she served two 18-month missions for the Church. Their first mission was to Monterey, Mexico in 1984 and 1985; the second to Buenos Aires, Argentina from 1989 to 1991. After Donald died in 2006, she moved to Salt Lake City, Utah. She’d spend the winters there and returned for the summers to the mountains of Colorado that she loved. The last years of her life were spent living in close proximity to and in the care of her daughters in Utah, Arizona and New Mexico. A viewing is scheduled for Friday, November 19th at the Church of Jesus Christ of Latter-day Saints in Manassa from 6 to 8 p.m. The funeral will be in the same church building at 11 a.m. on Saturday, November 20th preceded by a family viewing at the church from 10 to 10:45. She will be interred in the New Manassa Cemetery next to her eternal companion.

Deaon Gilleland Jarvies was born September 24, 1925 in Manassa, Colorado. She died on November 13, 2021 at the age of 96 in Gilbert, Arizona. Deaon was the second of two children born to Cornelius (Con) and Dora Mortenson Gilleland. Her older... View Obituary & Service Information

The family of Deaon Gilleland Jarvies created this Life Tributes page to make it easy to share your memories.

Send flowers to the Jarvies family.