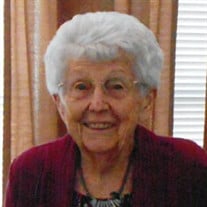 Clara Margaret Herberle passed away February 6, 2020 peacefully at the incredible age of 103. Clara was born to William and Edith (Wigand) Foltz in Henderson, Minnesota on April 25, 1916. She was married to Alois G. Herberle on September 21, 1940, and after their union they moved to California,. She was a homemaker all her married life and cared for her home and her children. Her interests were writing memory stories about her childhood, traveling, reading and doing crossword puzzles. She had received her education in the Henderson Public School District and then on she went to the Mankato School of Business. She was the last surviving member of her graduating class of 1934 from high school.. In 2002 she moved to Colorado to live with her daughter and son-in-law Mary and Michael McDowell, where she was lovingly cared for. Clara is survived by her son Alois Butch Herberle, daughters Gerogia Lu Romo, Elizabeth Garcia, Mary McDowell who she lived with in Colorado, as well as grandchildren Judi Randall, Ronald Herberle, William and Joseph Romo, Christopher Moller, Michael McDowell, 14 great-grandchildren, five great-great-grandchildren, many nieces, nephews and cousins. She was preceded in death by her parents, her husband, her sister Mae, brother Floyd, and her grandson Roger. A Celebration of Life will be held on Wednesday, February 12, 2020 at 4:00 PM at the Romero Funeral Chapel in Alamosa. Inurnment will be held in San Francisco, California at a later date where she will be laid to rest next to her husband.

Clara Margaret Herberle passed away February 6, 2020 peacefully at the incredible age of 103. Clara was born to William and Edith (Wigand) Foltz in Henderson, Minnesota on April 25, 1916. She was married to Alois G. Herberle on September 21,... View Obituary & Service Information

The family of Clara Margaret Herberle created this Life Tributes page to make it easy to share your memories.

Send flowers to the Herberle family.