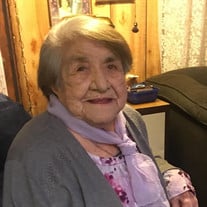 La Isla resident Celina Maria Romero, 99, went home to be with the Lord on March 25, 2020 at the Conejos County Hospital in the company of Angels. Celina was born on August 14, 1920 in Calcite, Colorado, the daughter of Lucas Lujan and Rebecca... View Obituary & Service Information

The family of Celina Maria Romero created this Life Tributes page to make it easy to share your memories.