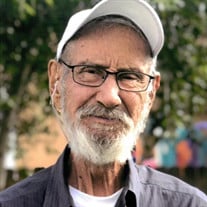 Celestino Ernesto Romero, 87, went home to be with the Lord on August 23, 2020, at his home surrounded by his loving family. Celestino came into the world on July 11, 1933, in Antonito, Colorado, the beloved son of Fares I. Romero and Beroniz Salazar-Romero. After graduating high school, Celestino served in the United States Army from 1954-1956. While stationed in Augsburg, Germany, he met the love of his life, Liselotte Stegmair. They were married at the Basilica of Sts. Peter and Paul in Dillingen, Germany in 1956. He moved his wife back to his hometown of Antonito where they soon began raising their family on the ranch in La Isla. He obtained his CDL and worked as a truck driver for various Perlite corporations for 28 years. He retired in 1996. Celestino was an exceptional and loving husband, father, grandfather, great-grandfather, brother, uncle, cousin and friend. His happiest moments were when all his children were together. He took pride in his family and put the needs of his children before his own. He was a member of the Knights of Columbus of Antonito. He enjoyed riding motorcycles, especially his Harley Davidson. He was a musician and loved playing his saxophone and his keyboards. He enjoyed working on his ranch, fishing, hunting, camping, boating, and snowmobiling. He was happiest when he was with his children, grandchildren and family. He held his Catholic faith close to his heart until his very last breath. Survivors include: his wife Liselotte “Lottie” Romero of Antonito, CO; daughters Donna (Nick) Romero of Scottsdale, AZ; Rhoda (John) Sisneros, Jennifer (Nicola) Capra both of Alamosa, CO; sons Duane (Vicki) Romero of Northglenn, CO; Gary (Valerie) Romero of Antonito, CO; Randy (Miguel) Romero, and Todd Romero both of Aurora, CO; 15 grandchildren: Roman, Janice (Kevin), Ryan, Joshua (Kendra), Matthew, Ryan, Kelsey (Adam), Dain, Kaeli, Todd Jr., Ashley, Camry (Ross), Drake (Nicole), Darin (Christine), Carmen, and 14 great-grandchildren. He is also survived by his sister-in-law Philomena Romero of Antonito, Colorado, numerous nieces, nephews, cousins and friends. Celestino was preceded in death by his parents Fares and Beroniz Romero, daughter Rhonda Lynn Romero, son Darren Ray Romero, sisters Delfina (Benancio) Romero, Viola (Tony) Lobato, Ruth (Alfonso) Ruybal, Martha (Donel) Martinez, brothers Medward (Celina) Romero, Eusebio (Frieda) Romero and Frank Romero. Vaya con dios mi padre! Viewing and visitation will be held on Friday, August 28, 2020, from 3-7 PM at the Romero Funeral Chapel in Antonito, CO. A vigil service with Recitation of the Rosary will be held on Saturday, August 29, 2020, at 10:30 AM at Our Lady of Guadalupe Catholic Church followed by a Mass of the Resurrection at 11:00 AM also at Our Lady of Guadalupe Catholic Church. Interment will follow at the Los Cerritos Cemetery with full military honors. To leave online condolences please visit romerofuneralhomes.com. The arrangements have been entrusted to Romero Funeral Home of Antonito.

Celestino Ernesto Romero, 87, went home to be with the Lord on August 23, 2020, at his home surrounded by his loving family. Celestino came into the world on July 11, 1933, in Antonito, Colorado, the beloved son of Fares I. Romero and Beroniz... View Obituary & Service Information

The family of Celestino Ernesto Romero created this Life Tributes page to make it easy to share your memories.

Celestino Ernesto Romero, 87, went home to be with the Lord on...