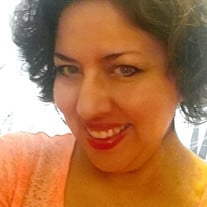 Romero Valley Funeral Home., Inc. 1407 State Ave. Alamosa, CO. 81101 719-589-9200---March 15, 2018 Obituary on: Bobbie Jean Fletcher Antonito resident Bobbie Jean Fletcher, 44, passed away March 14, 2018 at the Conejos Hospital with her loving family by her side. Bobbie Jean was welcomed into the world on July 15, 1973 in Denver, Colorado, the daughter of Tom Baca and Marilyn Mandonado Baca. Bobbie Jean was an exceptional and loving daughter, wife, mother, grandmother, sister, aunt, cousin and friend who enjoyed crocheting, going fishing, camping and being around people, making them laugh. Her greatest joy in life came from the time she spent with her family and friends. Survivors include her husband Larry Fletcher of Antonito, CO; parents Tom and Marilyn Baca of Denver, CO; mother and father-in-laws Larry and Lucille Fletcher of Delta, CO; sons Mark (Brittany) Romero, Larry Fletcher both of Denver, CO; Aiden Fletcher of Antonito, CO; grandchildren Christina Romero, Oriah Romero and Journey Romero all from Denver, CO; sisters Lucinda (Randy) Vialpando of San Luis, CO; Kristy Baca of Broomfield, CO; Nicky Jo (Jose) Montoya of Denver, CO; and one brother George (Lynell) Baca of Denver, CO. She is also survived by numerous aunts, uncles, nieces, nephews, cousins and friends. Cremation was chosen and a Memorial Mass will be held on Saturday, March 24, 2018 at 11:00 AM at Our Lady of Guadalupe Catholic Church. Inurnment will be held at a later date. Family would like to invite those who attend for refreshments after services that will be held at the Chavez S.W. Market on Main Street. The care of arrangements have been trusted to and placed in care of Romero Funeral Home of Antonito

The family of Bobbie Jean Fletcher created this Life Tributes page to make it easy to share your memories.

Send flowers to the Fletcher family.