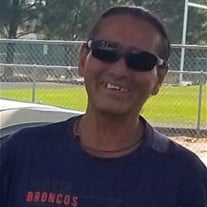 Alamosa resident Bernie Randy Suazo, 51, went to his eternal rest in the company of angels on October 30, 2019 at the San Luis Valley Regional Medical Center, surrounded by his loving family. Bernie was born on September 16, 1968 in Del Norte,... View Obituary & Service Information

The family of Bernie Randy Suazo created this Life Tributes page to make it easy to share your memories.

Send flowers to the Suazo family.