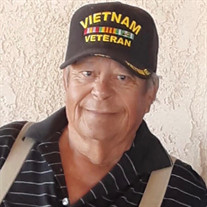 Longtime Alamosa resident Benito Adonis Medina, 75, passed away unexpectedly October 11, 2021at his home surrounded with his loving family. Benito was welcomed into the world on December 21, 1945, in San Acacio Colorado. He was the beloved son of Romolo Medina and Carolina Mondragon Medina. After he graduated high school, he went on to enlist in the Service. Benito served and was a veteran of the United States Army. Once he completed his duties in the service he was honorable discharged and came back to the San Luis Valley, where he met and married the love of his life Belen Romero on August 29, 1971 in Alamosa. They shared a long and loving union and recently renewed their vows and were so happy to be celebrating 50 years of marriage. Benito worked for Adams State University after putting in many years of work as a custodian. He was an exceptional and loving person and enjoyed going fishing, camping and spending as much time as possible with his family and friends. He was the rock of his family and will be dearly missed. Benito was preceded in death by his parents Romolo and Carolina Medina, son Orlando Medina, grandsons Abel Trey Salazar, Santigo Ivan Medina, granddaughter Selena Maria Flores, brothers Eloy Medina, Ed Medina and sister Jane Rodriguez. He will live on through his loving wife Belen Medina of Alamosa, CO; daughters Bernice Arvizo, Lori (Merced) Flores, Josephine Espinoza all of Alamosa, CO; Amalia (Lupe) Garcia, Amanda (Jason) Martinez both of Denver, CO; sons Benito Medina Jr. of Alamosa, CO; Joseph Medina of Tulsa, OK; 30 grandchildren, 18 great-grandchildren, sisters Joan Gonzales of Georgia, Donna Maez of Alamosa, CO; half brothers Jerry (Suzanna) Medina, Robert Medina both of Alamosa, CO, Desiderio (Dolores) Gonzales Jr. of Pueblo, CO; Albert Romero of Capulin, CO; best friends Ross Lobato, Everado Gaxiola and Billy Martinez all of Alamosa, CO. He is also survived by numerous nieces, nephews, cousins and friends. Viewing and visitation will be held on Friday, October 15, 2021 from 1-8 PM at Romero Funeral Chapel in Alamosa. A Funeral Service will be held on Saturday, October 16, 2021 at 10:00 AM at River of Life Assembly of God Church in Alamosa. Interment will follow at the Alamosa Cemetery with full military honors. To leave online condolences please visit romerofuneralhomes.com. The care of arrangements has been entrusted to Romero Funeral Home of Alamosa.

Longtime Alamosa resident Benito Adonis Medina, 75, passed away unexpectedly October 11, 2021at his home surrounded with his loving family. Benito was welcomed into the world on December 21, 1945, in San Acacio Colorado. He was the beloved son... View Obituary & Service Information

The family of Benito Medina created this Life Tributes page to make it easy to share your memories.