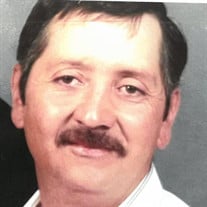 Antonio "Tony" Ernest Lopez, 67, died Saturday May 1, 2022 at his home in Center, CO with his family by his side. Tony was born on June 13, 1954 in Penasco, NM; to Aneda and Elizardo Lopez. He was the fourth of fifteen children. He grew up in Penasco and moved to Center, CO where he met the love of his life Evelyn. They were married on January 15, 1977. They moved to Grants, NM where they had two children, Toni and Bernie. There Antonio worked in a Uranium Mine. They moved back to Center when the kids were little. There he worked as a farm laborer for a potato farmer where he became a foreman. He also was a Hotshot with his brother for a little while. He loved doing it but it was a hard job. As his kids grew up they had families of their own. That's when he became a grandpa. He loved his grandchildren, they had a very special place in his heart. He loved taking his family fishing and camping. He loved when his family was together. He loved watching westerns. He loved watching his Denver Broncos play. He is survived by his wife Evelyn, his children Toni (Brian) and Bernie (Talaya). His grandchildren Sydney, Brigid, Isaiah, Lucas and Julie. His brothers and sisters Rosa (Eloy), Larry (Dorris), Clyde (Carol), Lorraine (Frank), Diane (Angel), Gloria, Randy (Shelly), Ricky (Maria), Lillian (Fernando) and Michael. His brother and sisters-in-law, Lionel, Annette (Charles), Brenda, Fern (Derrick), Fran (Steve) and Jody (Bill). Many cousins and nieces and nephews. His beloved dogs Bobo, Buttercup and Chalo. His grandogs Scampy, Bambino, Snowball, Princess and Boo and his grandcat Dory. He is preceded in death by his parents Aneda and Elizardo Lopez, his brothers and sister Tommy, Arnold, Cathy and Michael. His Aunt Amelia Rodriguez. His in-laws Joe and Ruth Martinez and his Brother in-law Bernie Martinez, as well as many other family members. He is also preceded in death by his beloved dogs Ebony and Chica. Antonio was a very hardworking and adventurous person. He was a jokester and a great friend. He will be missed greatly, but he will always be in our hearts. Services will be held at Saint Francis Jerome Church in Center. The vigil will be Friday May 6 at 7pm. The funeral mass will be Saturday May 7 at 10am. The Interment will follow mass and will be at La Garita Cemetery. Romero Funeral Home of Antonito is in care of the arrangements.

Antonio "Tony" Ernest Lopez, 67, died Saturday May 1, 2022 at his home in Center, CO with his family by his side. Tony was born on June 13, 1954 in Penasco, NM; to Aneda and Elizardo Lopez. He was the fourth of fifteen children. He grew up in... View Obituary & Service Information

The family of Antonio "Tony" Ernest Lopez created this Life Tributes page to make it easy to share your memories.

Send flowers to the Lopez family.