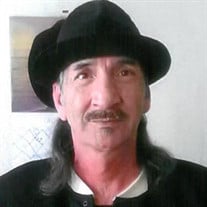 Alamosa resident Anthony Ray Brown, went to his eternal rest on October 10, 2018 surrounded by his loving family. Anthony was born on May 10, 1959 in Ft. Garland, Colorado, the son of Antonio Demecio Brown and Maria Estella Trujillo. Anthony was a compassionate and loving husband, father, grandfather, brother, uncle, cousin and friend who enjoyed fishing and hunting, writing poetry, picking piñon, going for walks and anything outdoors. His greatest joy in life came from the time he was able to spend with his family and friends. Survivors include his stepdaughters Kayla and Rachel Palmer both of California, grandchildren Sarah and Donna Herring both of Pueblo, CO; sisters Linda Medina, Patricia Medina both of Alamosa, CO; Marie Carleen (Ron) McArtor of Florida, Bernadette (Gene) Cisneros of Ft. Garland, CO; Lynn Brown (Joe Sandoval) of Alamosa, CO; brothers Christopher Brown of Northglenn, CO; Michael (AnnaBelle) Brown of Lubbock, TX; Stevie Brown of Canon City, CO; Henry (Amy) Brown of Superior, CO. He is also survived by his Godson James, as well as numerous nieces, nephews, cousins and friends. Anthony was preceded in death by his parents Antonio D. Brown and Maria Estella Trujillo, wife Donna Palmer and his sister Ellen Brown. Cremation was chosen and a Memorial Service will be held on Monday, October 15, 2018 at 11:00 AM at the River of Life Assembly of God Church in Alamosa. Inurnment will be held at a later date.

The family of Anthony Ray Brown created this Life Tributes page to make it easy to share your memories.

Send flowers to the Brown family.