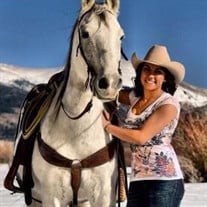 Chama resident Angela Brianna Lobato-Esquibel, 25, gained her angel wings on July 25, 2021. Making her grand entrance into the world on February 10, 1996 in Albuquerque, New Mexico, the beloved daughter of Bernadette Marie Romero Lobato and Alonzo Joseph Lobato Sr. After graduating Centennial High School, she went on to enlist and serve in the Army National Guard. She excelled at the duties tasks asked of her and was made team leader and sergeant. While still keeping active in the guard she went on to get POST certified and become a police officer. Angela was a proud police officer of the San Luis Sheriff's Office. She served her community and loved the interaction she got with everyone she came across. She was a kind and loving person, most importantly an amazing mother and role model to all especially her daughter Aspen. Angela loved riding horses, going camping, hunting, snowboarding and taking care of animals. She cherished the time she was able to spend with her daughter, family and friends. Angela was not with us nearly as long as we would have all liked, but the memories, laughs and love she left with each and everyone who knew her will last a lifetime. She is already dearly missed by so many. She will continue to live on through her husband Eric Esquibel of Las Vegas, NM; daughter Aspen Brooke Esquibel of Chama, CO; parents Alonzo and Bernadette Lobato Sr., of Chama, CO; brother Alonzo Lobato Jr., of Chama, CO; sister Alexis Lobato of Chama, CO; grandparents Margaret Romero of Albuquerque, NM; Berlinda Vigil of Los Fuertes, CO; Lorraine Montoya of Las Vegas, NM; cousin Eric Luckett of San Diego, CA: godparents James and Darlene Jasler of Albuquerque, NM; Franchesca and Ian Weinreich of Ignacio, CO; Maria and Willie Atencio; god sister Angelica Lucero of Albuquerque, NM; in-laws Phil and Nancy Esquibel of Las Vegas, NM; best friends Margarita Atencio, Magdalena Atencio both of San Pablo, CO; as well as numerous aunts, uncles, cousins and friends. Angela was preceded in death by her grandfathers Carlos Lobato Sr., Bennie Romero, aunts Mary Zamora, Angela Chavez, Carmen Sanchez and uncle Orlando Sanchez. A Vigil Service with Recitation of the Rosary will be held on Friday, July 30, 2021 at 9:30 AM at Sangre De Cristo Catholic Church. A Mass of the Resurrection will follow at 10:00 AM also at the Sangre De Cristo Catholic Church in San Luis. Interment will be held at the Chama Cemetery with full military honors. To leave online condolences please visit romerofuneralhomes.com. The care of arrangements have been entrusted to Romero Funeral Home of San Luis.

The family of Angela Brianna Lobato-Esquibel created this Life Tributes page to make it easy to share your memories.

Send flowers to the Lobato-Esquibel family.